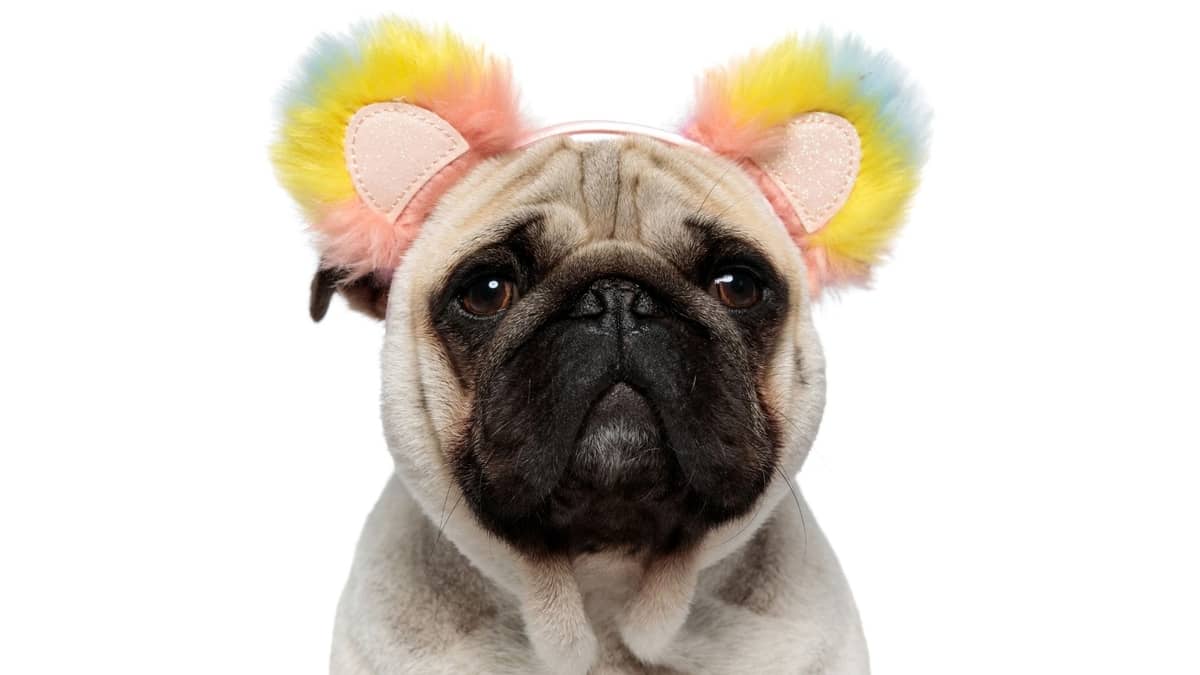 The pug button ear is one of the breed’s variations, with the ears folding forward in this case. Pugs have two eyes, two ears, a squishy tiny nose, and a curly little tail. Unfortunately, the Pug’s ears (and those of several of its mix-breeds like Boston Terrier and Frenchie Terrier Mix) are prone to mites, infections, and yeast.

It’s also conceivable that these conditions can get worse until your Pugs become deaf. These problems can affect mature pugs, senior pugs, or pug pups, so knowing the warning symptoms of a damaged pug ear is crucial.

While the Pug ears come in a couple of shapes and sizes, one feature remains consistent across the breed: the folded, flap-over ear. He should not have fully raised ears or full, flopped drooping ears in this breed.

During the first year, the leather fold could be a little shaky. Also, when teething, pups’ ears may be uneven. That usually straightens out and fixes itself after the teething process is complete and all adult canines are in position.

They are neatly pointing in the direction of the eyes. The button ear is the recommended appearance for conformity events in practically every recognized dog show. Rose ears, on the other hand, are acceptable.

A Pug dog with button ears (those that fold down toward the dog’s eyes) will normally receive more points. Both will be symmetrical, virtually mirrored pictures for appropriate conformation, with neither straying from this position.

That is the other widely acknowledged Pug ear variant. The rose ear is what it’s called. As you can see, there is a significant difference between these button ears and the rose ears. Each ear has a fold because of this. It stands tall at the base, but then it folds over again, this time in a forward motion.

The ears on the top button style are close to the face, but the ears on this rose style are off to the side. If a pug’s ear is too far to the side, it’s called “flying ears,” and while it gives the dog a funny look, it’s not good in conformation contests.

Taking care of your Pug’s ears is an important part of grooming. That is done for the sake of health, not merely for the sake of hygiene and good times. Infection, which might be an issue for this breed, can be avoided with proper care. Infections can be spread by dirt, debris, and excess wax.

It’s good to remember that you, as an owner should clean your pug ears just enough, but not too much. Why? Because overdoing it can lead to dry skin. A certain degree of wax removal is also normal and important for capturing dirt. It’s nice to also mention that is possible to have yeast infections if you do it too much.

Color of a healthy pug’s ears

The right color of the skin is pink when you elevate the Pug’s ears to peek behind the flap and view the canal opening. If it’s red, has sores, or exhibits indications of irritation, it might be an infection. If there are these kinds of problems, it’s good to contact a veterinarian.

The offensive odor of a pug’s ears

Some owners are concerned about an odor coming from a Pug’s ears and wonder if it is typical of the breed. The explanation is that it is out of the ordinary. A strong, foul odor might be a result of excess wax or an ear infection (mites, yeast, or bacteria).

While the Pug ear comes in a couple of shapes and sizes, and each dog has its distinct appearance, one thing is certain about this breed: The ear is a folded ear, which means it rises and then folds over.

Pug ears differ in the angle at which they fold, as well as the distance between the ear tip and the side of the face. Let’s look at some samples of the many styles of ears that a Pug might have:

The button ear on a Pug occurs when the ear folds forward and lies on the face, pointing toward the outer corner of the eye. The outer ear canal is completely enclosed. This is the preferred ear shape in conformation shows.

The rose ear on a Pug is like a button ear in that it folds over, but the main distinction is that the ear has a softer fold that allows it to stand out from the Pug’s face. On a Pug, the burr is a piece of cartilage that generates a tiny protrusion on the outer ear canal, which you can see as the rose ear.

In the show ring, this ear shape is acceptable but not desirable.

The rose flying ear, often known as the fly ear, is a defect in the Pug breed. The ear flaps are scarcely folded and protrude far out from the Pug’s face.

Though there is nothing wrong with a Pug possessing this sort of ear set as a pet, it is a hereditary feature that may be passed on.

Is It Possible To Make A Pug’s Ears Flatter?

Like other physical characteristics, a Pug’s earset is inherited. There is no way for owners to adjust the ear set on a Pug without cosmetic surgery. You may have heard of taping, which is a method of holding a puppy’s ears in a desirable position using tape in the hopes that they would stay that way.

However, this seldom yields visible effects and may be time-consuming and stressful for both the owner and the dog. 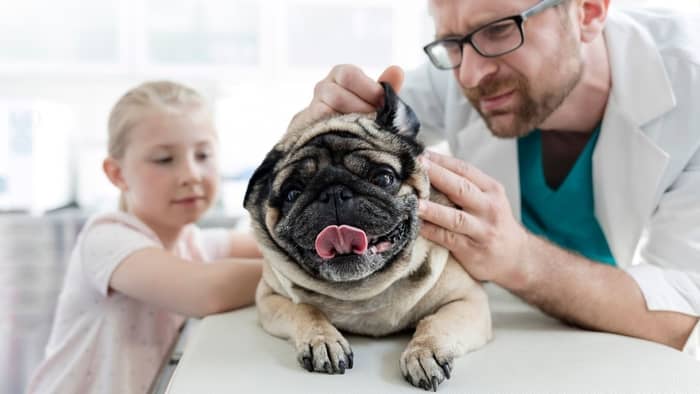 Ear infections in Pugs can be a result of a couple of factors, including persistently filthy ears and moisture in the ears. Yeast infections can also be a result of an immune system reaction, which is common in people with allergies.

Ear mites are very contagious and may be passed from one dog to the next when they are in close quarters. That is common at shelters, doggy daycare scares, and other institutions.

These preventative measures can help protect your Pug from ear issues and may even save you money in the long run. Most essential, happy Pugs have clean, healthy ears. If you’re not sure whether your Pug’s ears are bothering them, it’s nice to consult a veterinarian.