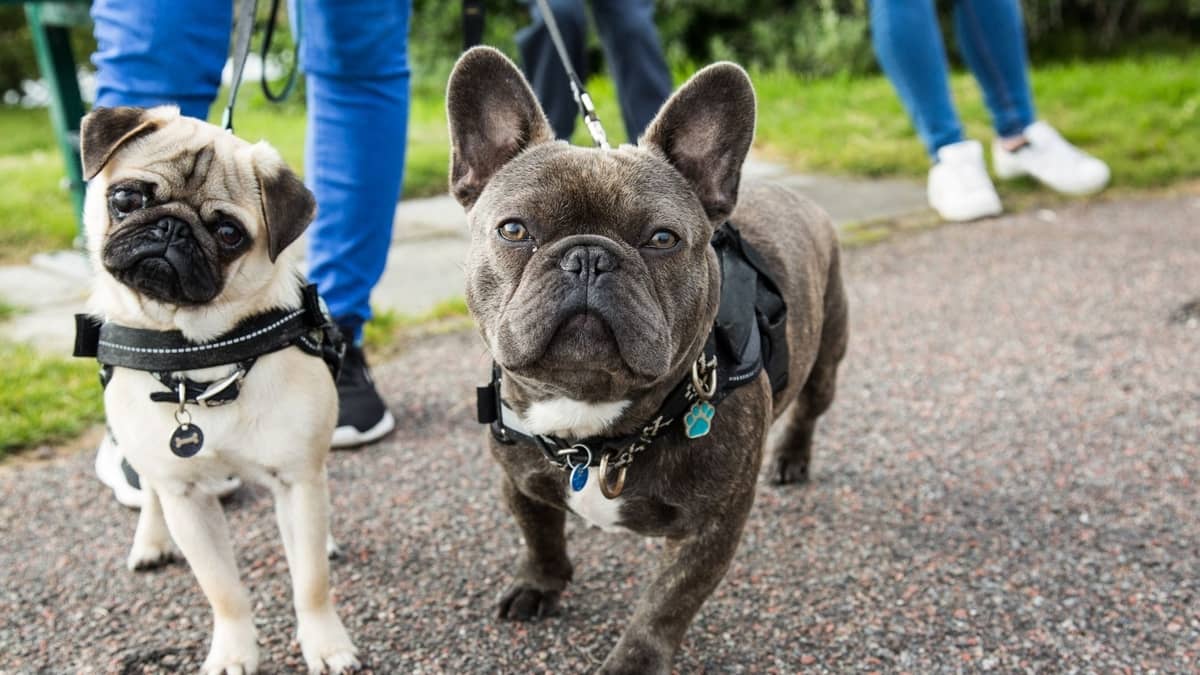 Do you consider yourself a fan of the wrinkle-faced canine companions? It’s hard not to be: they are just irresistibly cute! The two very popular US breeds were crossbred and we got one very adorable fella: French Bulldog mixed with Pug.

They are also very similar in size and weight, almost like brothers: both species don’t get taller than 13 inches at the shoulder and weigh no more than 22-25 pounds. Bulldogs can actually grow a little bigger than their flat-faced canine counterparts: up to 28 pounds. Their coat color variations are pretty identical as well: black, white, fawn, brown, and cream.

So where did it all begin for the Frenchie Pug?

Origin Of The French Bulldog Mixed With Pug

Pugs were spoiled and adored by the Chinese Emperors. This toy breed became a part of the family, for generations to come.

French Bulldogs made their way into France from England right around the Industrial Revolution times in Europe when many skilled laborers moved in a search of a better life. The Frenchie was recognized as a separate breed and named “Bouledogue Francaise” which stands for  “French Bulldog.”

Most likely, the French Bulldog mixed with Pug breed originated in the United States at the beginning of the 20th century. Right after both parent breeds were officially registered by the American Kennel Club. Firstly, the Pug got recognized around 1885, followed by the French Bulldog’s registration in 1898. It is not clear who the initial breeder was but the new hybrid fur baby quickly gained popularity with the American middle class. So why get the French Bulldog mixed with Pug breed? What is so special about them? Let’s dig into it.

Well, first of all, it is hard not to fall for the extremely adorable hybrid pup. Especially so if you are a long-time fan of bulge-eyed breeds in general, be it a Pug, a Bulldog, or a Boston Terrier. That wrinkled one-of-a-kind face, making all those weird wheezing and snuffling noises, just asking to be petted and kissed.

The Frenchie Pug is a perfect pet to have if you don’t have a big living space. They do great in apartments since they are so small and compact. Also, they don’t require vigorous types of activities throughout the day, two-three short walks in the neighborhood a day will do it.

The Pug mixed with a French Bulldog is a very loyal, friendly, and playful breed. They do very well with kids and are considered one of the most social breeds. Have more than one dog in the household or feline friends? No problem, this cutie can get along with them as well, while not being territorial or aggressive. It will happily share toys and its living space in exchange for having a great playmate at hand. Having another canine pal will actually be very beneficial for a “clingy” Frug. It needs somebody to keep it company throughout the day, while pet parents are away.

French Bulldog Mixed With Pug: The Good and The Bad

Any dog breed will have its positives as well as some “skeletons in the closet.” Frugs are no exception to the rule. Let’s take a look at some common pros and cons for owning a Pug mixed with a French Bulldog pup.

French Bulldog mixed with Pug may be a great pet choice for any type of household, and especially for families. It will become your “happy pill” and your “class clown” combined. They will be cracking you up with their funny as well as dorky personalities.

Like any pooch out there, this breed has its pros and cons. Therefore you need to do extensive research to see if both of you are going to be a good fit.