A long-time legend is that Pugs were initially bred to hunt lions.  It is said that their short snout was so that they could hold on and take a lion down.  However, the Pug originates from China, and lions do not live in China. So if you’re wondering why pugs with short snouts were bred, read on.

Why Were Pugs Bred With Short Snouts?

Dogs, including the Pug with flat faces (short snouts), are being bred mainly for aesthetic reasons.  Science shows that the broadhead shape seen in these dogs resulted from selective breeding and didn’t evolve naturally.

The scientific word vets use to describe short-nose or flat-faced dogs is: “Brachycephalic.”  This word comes from two Greek words meaning “short” and “head.” They are also described as snub-nosed dogs.

Some people call the Pug with their short noses and wrinkled faces early “Designer Dogs.” It is known as a genetic mutation. Selective breeding has caused what is now a genetic modification. This is a modification of the dog’s DNA.

The Pug and other short snout dogs, flat face dogs result from selective, intentional breeding specifically to emphasize flatter snouts and certain “cute” features. Their short-pushed in and wrinkled faces make them appear to be wise and as if they know and understand everything.

It is easy to fall in love with a Pug with its distinctive features of a wrinkly short snout and a curled tail. According to the kennel club, people love these dogs; they are extremely popular in the US, Australia, New Zealand, and the UK. 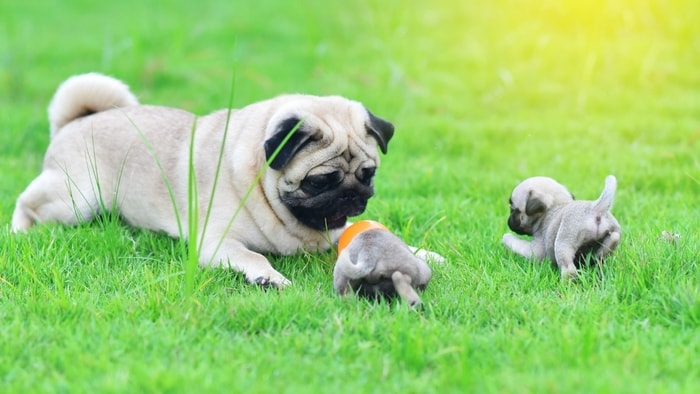 Read more about: Can You Shave a Pug: What First Time Pug Owners Should Know

Pugs in ancient times were bred to be companions for the ruling class families in China and for cuddling. They were also considered good luck because of the wrinkles in the forehead, which resembled the Chinese Character trait for a Prince.

The breed can be traced back at least 2000 years. Emperors kept pugs, and they often had soldiers guarding them and had their own small castles.  The ruling class treasured them. China started trading with Europe in the late 1500s.  It is believed they were smuggled to Holland about that time.

Companion to The Stars

Pugs were companions to many famous people.  Marie Antoinette of France had one named “Mops.” Napoleon Bonaparte’s wife had one called “Fortune,” which kept her company while she was imprisoned at Les Carmes prison. Queen Victoria owned and bred several, and she banned cropping their ears as she felt it was a cruel practice.

Pugs are known to be clownish and loveable furry friends.  They love to be with their humans as much as possible.  They were bred for companionship.  The motto for the Pug is the Latin phrase “Multum in parvo” (a lot in a little).

Some owners think that Pugs have a range of human-like expressions such as surprise, happiness, and curiosity. They are adorable with their short snouts and an extremely popular breed.

They are affectionate, charming, stubborn, docile, mischievous, clever, sociable, and attentive. But, on the other hand, they are calm and quiet.  They have a life expectancy of 12-15 years.

Why Do Pugs Have Short Snouts- Downsides

The downside of this wonderful little breed is that due to the intentional short-snout breeding, this little dog can sometimes have health issues.  They can have breathing issues that can be problematic in the heat and humidity.

They also do not have as good of a sense of smell as other dogs. Because they are considered to have “Brachycephalic syndrome,” they can have noisy breathing, snorting, snoring while sleeping, and difficulty breathing. They also can tire easily from exercise.

A fun note is that a group of Pugs is called a “Grumble.” This is because pugs were bred with a short snout mainly for their adorable cuteness that many people have fallen in love with.