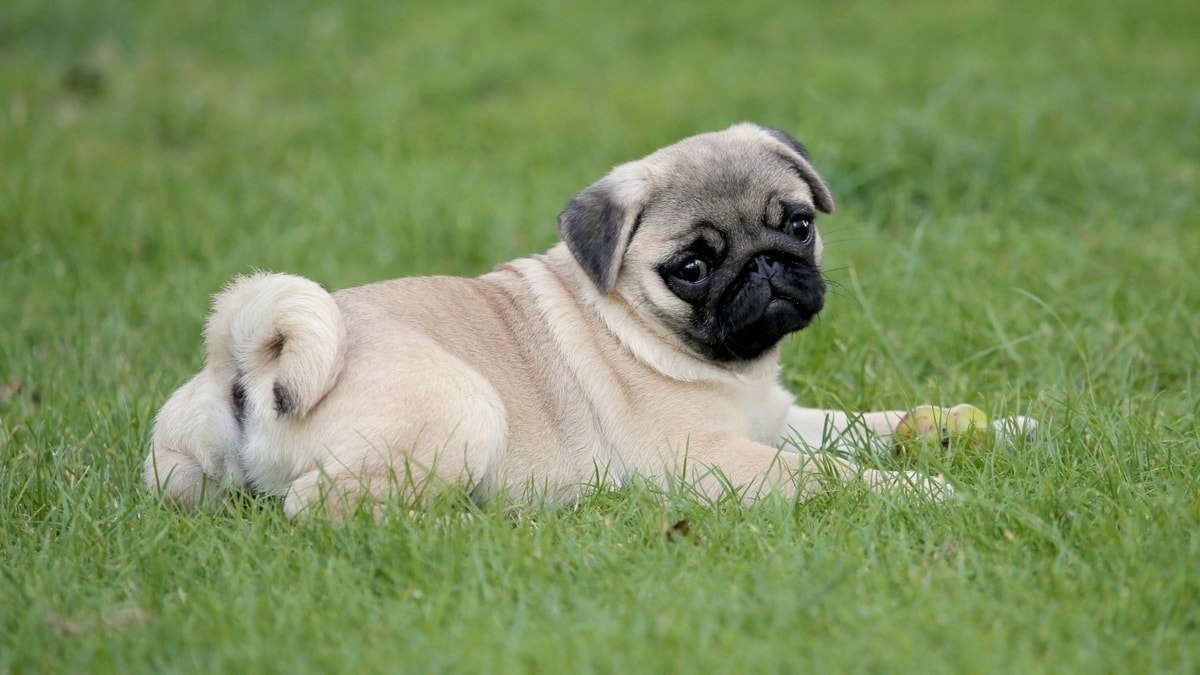 Why do Pugs have curly tails? Their tails are one of the things that Pugs are famous for. The curly Pug tail is unique in the dog world. Very seldom will you see another breed with this kind of tail?  This tail is also referred to as a corkscrew tail.  We will look at the reasons why Pugs’ tails curl. Why are Pugs tails curly right from birth?  Are there breeding practices that have caused the Pug to have a curled tail? Is the Pug able to straighten out its tail?

Are they able to wag their tails?  We will also look at the breed standard concerning the tail.  What is the Pug double curl tail and what genetics are involved?  Can a Pug tail go straight or limp?  What medical conditions can affect the Pug tail?

What Is The Tail and Why Do Pugs Have Curly Tails

The definition of a Pug tail is this: “The tail is a bone and cartilage, and it is part of the spine.  Its curling is due to deviation in the spine in which the vertebrae are wedged-shaped This causes the tail to curl when it is held naturally.”

Why do Pug’s have curly tails? Tail curling is a genetic trait that has been bred into the Pug.  It is the result of hundreds of years of breeding practices.  For instance, it is possible for a pup to have a Pug double curl tail.  This is also referred to as a screw tail or corkscrew tail. The tail may uncurl naturally if the Pug is relaxed, sleeping, eating, sad, or perhaps it is a sign of illness.

What About Puppies Curly Pug Tail

Pug puppies are not born with curly tails.  Actually, puppies are born with straight tails.  Then why are Pug’s tails curly?  Pug puppy’s tail will begin to develop the curl in the first few weeks of life. A puppy uncurls its tail many times during the day.  For instance, as the pup grows older the tail curl becomes tighter. The result is that at about two months of age a pup should have a curled tail.  If it has not curled the pup should see a veterinarian to see what is wrong. 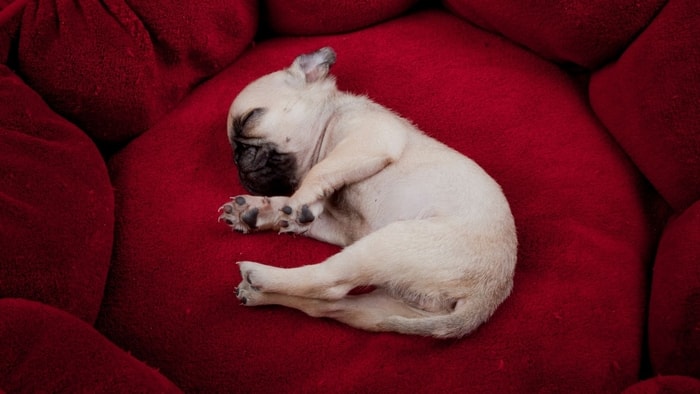 A puppy will start wagging its Pug double curl tail about 6 or 7 weeks of age.  This is an important feature of a puppy as this is their way to communicate with us. An interesting feature of the Pug’s tail is that just like left and right-handed people a Pug tail can curl either to the right or to the left.

Kennel Club Standards Tell Us Why do Pugs have Curly Tails

The issue of why do Pugs have curly tails is even of interest to the kennel clubs. According to the American Kennel Club and the Canadian Kennel Club, “the tail is curled as tightly as possible over the hip. The double curl is perfection.”

Breeders strive for that Pug double curl tail. Also, the Kennel Club of the UK and the Federation Cynologique Internationale ( which is the largest breed registry in the world, having more than 80 countries listed as members of it) and also the Australian National Kennel Council says that “the tail is to be high -set, and tightly curled over the hip.”

Once again the Pug double curly tail is most desirable.  When judged in the show ring the best thing is for the tail to be tightly curled.  So, why do Pugs have curly tails? One reason might be because breeders breed for it.  The double curled tail is highly favored in show competitions.

Why do Pugs with curly tails appear to be limp? This can mean there is a weakness in the tail.  It may be a result of breeding practices or other conditions.  Sometimes a Pug may be holding its tail in a different than normal angle. The Pug may also have its tail down. The Pug tail may be injured. For instance, the bone may have been injured.  The dog may not be able to move its tail since could be painful to the dog.

Conditions That Can Affect The Why Do Pugs Have Curled Tails

Pugs express their feelings with their tails.  They can be doing this either on purpose or just subconsciously.  Most dogs express themselves in this way.  As with other dogs, the tail can send a message of how the dog is feeling.  They can un-curl their tails when they are feeling sad or afraid.  They can also do this with their tail if they have done something wrong and are afraid, and actually, feel guilty. However, the Pug curly tail is almost always in that tight double curl.

As well as asking why do Pugs have curly tails, we must ask why they sometimes do not curl. There are medical reasons for the Pug tail to be un-curled.  Such as:

Learn more about: Can You Shave a Pug: What First Time Pug Owners Should Know

Why do Pugs have curly tails? The Pug double curled tail is a result of breeding practices for many years.  Some breeders are still working to obtain even tighter curls in their breeding programs.  This is fostered because of this desire to have show pups that will be admired in the show rings.

Please leave us a comment below on what you think of this article. Please share it among admirers of Pugs.