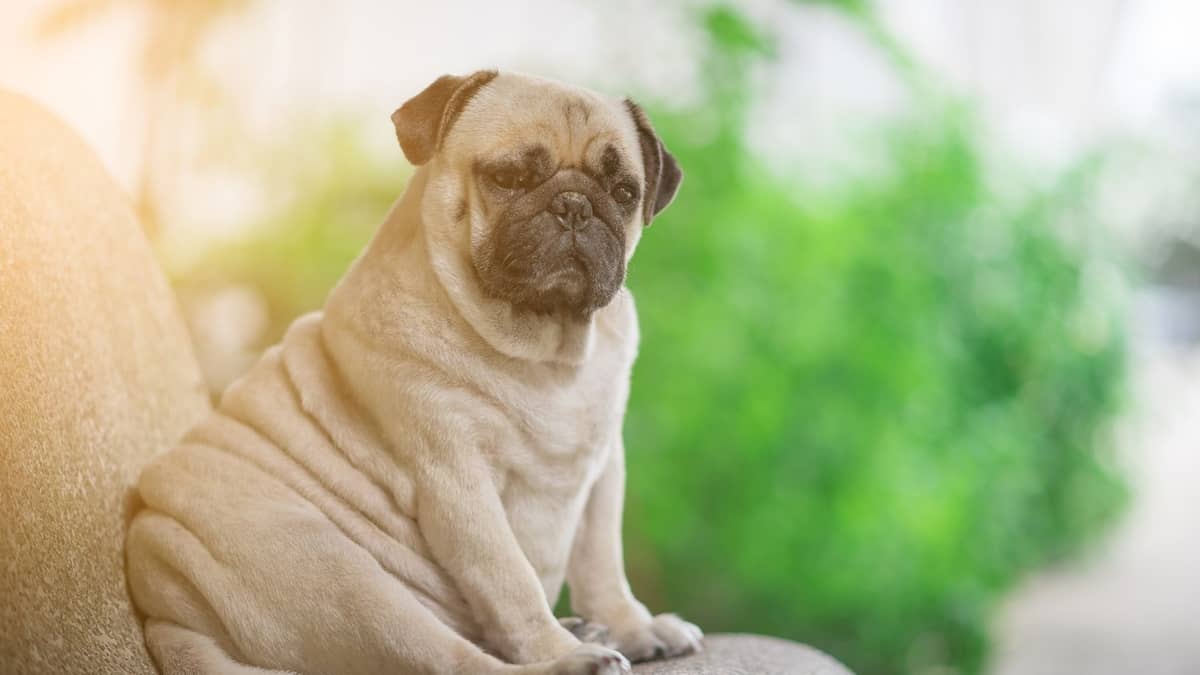 Pugs are one of the most identifiable dog breeds out there. Their distinct smushed face and curled-up tail pull at the heartstrings of many dog owners and make them an extremely popular choice for a family dog.

Now, it is no secret that pugs come with a myriad of health issues due to over breeding but that has not always been the case. All current dog breeds have evolved from something else which begs the question, where did pugs originate from? There is a long history of evolution and breeding that has led to the pug we see today. We’re going to walk you through that history so you can become more familiar with the breed!

Besides the cute appearance and cuddly nature of the pug breed, there is a lot of history behind the breed. While some dog breeds have histories of being cattle dogs or swimming dogs, pugs had a unique purpose in their early days. Pugs were often the companions of Chinese emperors. This dog breed was never meant to be an active or athletic dog, instead, they were meant to sit around and be companions of rich and respected people.

The Pug breed history is a pretty interesting one. Emperors of ancient China preferred flat-faced, small dogs which paved the way for the development of the Shih Tzu and Pug breeds. Pugs were extremely valuable and the only people who had them were of royalty or high status.

Pugs began to spread into other parts of the world outside of China somewhere around the 1500s. Dutch traders returned to Europe from China with Pugs and they then became a famous breed in Holland as well. Later on, William and Mary of Orange arrived in England to take the throne of the monarchy and brought along Pugs to accompany them.

Many dog breeds have changed their purpose over history but that is not true of Pugs. The Pug breed history shows that they have always been affectionate, cheerful, and playful dogs. These dogs have always been pets, rather than having another purpose like cattle herding or protection.

While pugs have not changed their purpose over their existence, that does not mean that they have always looked and been bred the same. There is a rich history to the pug ancestry. Many experts believe that pugs are the descendants of the Happa breed of dog. Happa dogs are short-mouthed dogs as well.

Pugs were well-regarded as royal dogs and dogs for people of high class. The 19th Century was no exception. Queen Victoria herself bred pugs during her reign. She loved pugs and they are found in many of the portraits of the Queen. The pugs in the paintings of the time had very significant differences from the pugs we know and love today. Back then, pugs had longer noses and longer legs. Some of the paintings also showed pugs with cropped ears, which is not standard for today’s breed.

The appearance of the modern pug is estimated to have emerged sometime during the 1860s. A wave of pugs were imported to England from China that had shorter legs and flatter faces. These pugs were bred and thus more pugs like them were born, paving the way to the standard look of the breed today.

Today’s breed of pug comes in three different colors: black, apricot and fawn. Fawn and apricot were the popular colors in ancient times, but today you see more and more black pugs. Traditionally when you think of pugs you think of the light fur with darker ears and snouts. Black pugs are completely black.

Despite their aloof appearance and lazy nature, pugs are actually very smart! They are in fact one of the brightest dog breeds. Even though pugs cannot be used for virtually any activities besides companionship, they are smart and can be trained very easily.

Another interesting fact about the pug breed is that they probably got their name from a monkey. In the early 18th century, a breed of monkey called marmosets was kept as pets and were called pugs. Because the pug and the marmoset look similar, they adopted the name pug.

Learn more about Can Dogs Have Sunflower Butter? To Give Or Not To Give – Pug Friend.

No matter where you think a pug got its name from, it is evident that there is a long and rich history behind one of the world’s favorite breeds. There is something admirable about the fact that pugs have always been bred as companions, they never had another purpose.

Throughout history, the pug has almost always maintained a seat on the throne. Whether that was with the Queen of England, the royal families of Holland, or the Dynasties of China, these animals have always been treated like royalty. They offer very little purpose other than companionship but they do a great job at such. When you think about getting your next dog, whether or not it is a pug, research the history of the breed, it might surprise you!

Read more about: What Do You Call A Group Of Pugs?