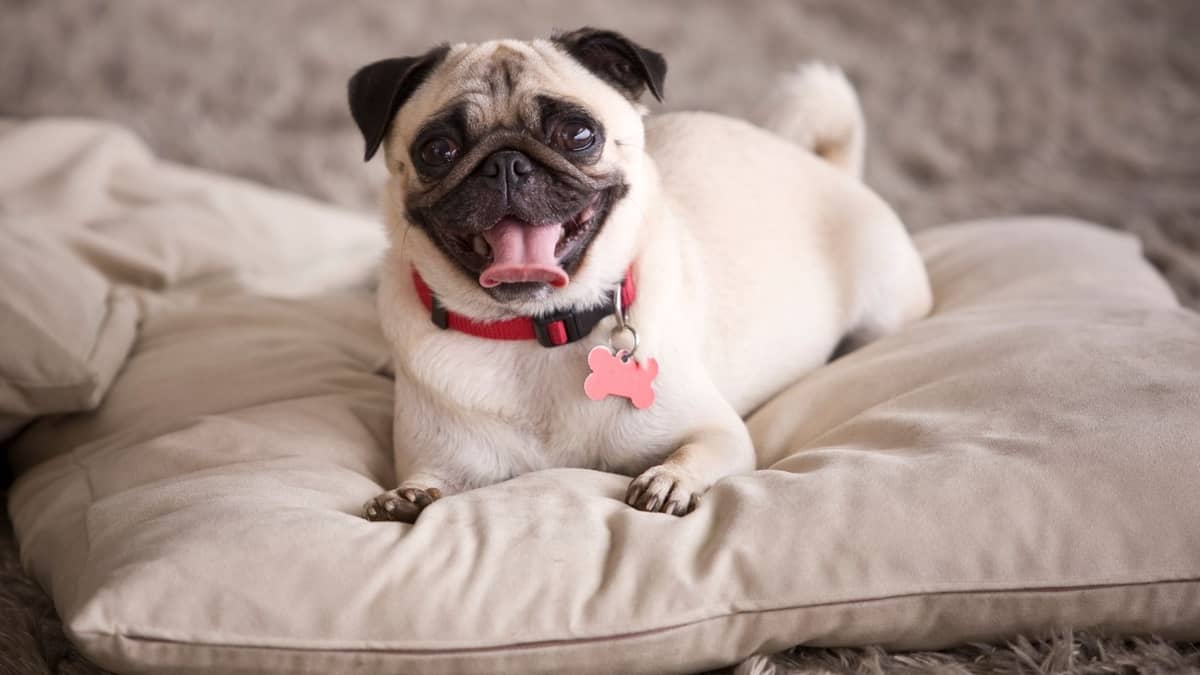 Last Updated on April 6, 2022 by Guillermina

What Does It Mean When a Dog Wheezes? There could be several reasons for such an occurrence, some are more serious than others. In any case, it is a scary sound to hear, enough to frighten any pet parent, experienced or not. More so if a pooch never had any issues like that before. Whatever the reason might be, the first thing any owner should do is try to calm down.

If you are going to start panicking, you are making matters worse for your fur baby. Let’s take a look at the most common reasons for those strange wheezing sounds and the necessary steps to take when you hear them. So,  what does it mean when a dog wheezes and how can a parent help?

What Does It Mean When a Dog Wheezes? Reasons

Happens a lot during hot months, especially with brachycephalic breeds like Bulldog, Shi-Tzu, and Pug. If a pooch stays outside in the heat for a long time, it can get extremely dehydrated and can even get a heat stroke. It is important to keep a dog out of the sun’s rays in the midday, but rather walk it either very early in the morning or in the evening, after 5 pm. Also, don’t forget to provide your mutt with plenty of water throughout the day. 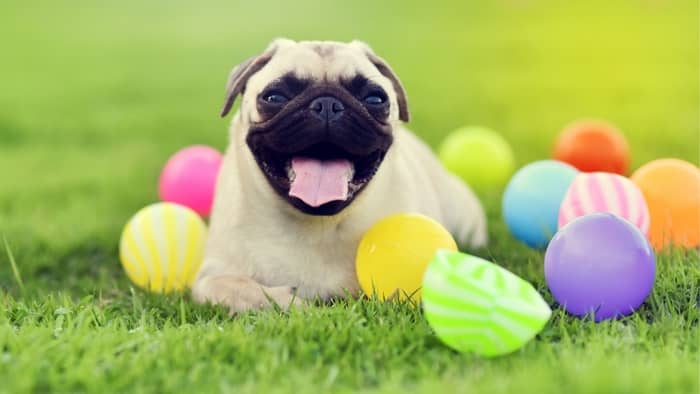 2. A Foreign Object Stuck in the Trachea

It does happen quite often, more so with breeds who have narrow throats/windpipes. Some canine species are born to be gobblers (Pugs, for instance), therefore they can easily choke on the food they eat and start suffocating. In case you noticed that you can perform a Heimlich maneuver on a poor pal to help it get rid of the foreign object. If your efforts were not paid off, grab your doggo and swiftly take it to the nearest animal emergency room.

What does it mean when a dog wheezes? Wheezing sounds may come from a pooch who is allergic to the spring pollen, dust, or second-hand smoke when it gets stuck in its nostrils, trachea, and bronchi. Besides wheezing, you may hear loud coughing sounds, as a poor furry fella is trying to get rid of whatever it is lingering in its airways. Flat-faced breeds like Pugs are inclined to get allergies very easily, therefore will be making the gasping sounds shortly after they get outside.

Any dog owner is aware that canines get the same types of ailments as humans do, including respiratory issues. One of these issues is bronchitis, which can actually be caused by the aforementioned allergy triggers. Some of the most common symptoms may include a strong cough, wheezing, vomiting, gagging, and even loss of consciousness in some severe cases. In case the air is dry in the house (usually during winter time), there’s a lot of dust mites lingering around as well as any smokers present in the household who puff right inside, a pet may develop chronic bronchitis. It is very hard to treat, compared to some occasional episodes. 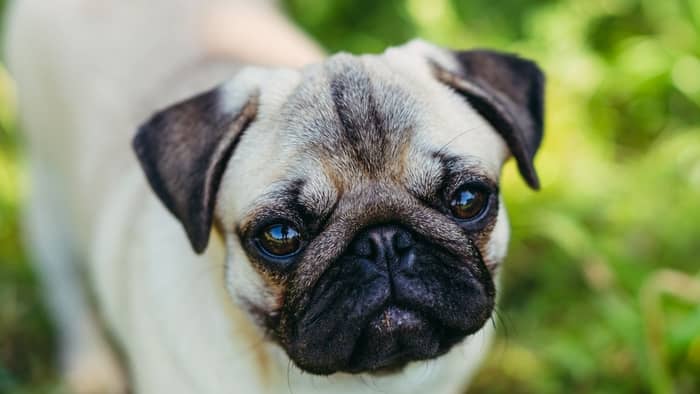 Happens when some or most cartilage rings that form the windpipe collapse, obstructing the normal inhaling/exhaling process. Any dog can be affected, no matter the breed. However, certain canine species may be at a higher risk for such a condition (toy breeds). Pomeranians, Yorkies, Chihuahuas, and Pugs are born with weaker cartilage (and the latter breed is smushy-faced with a flat nose, making breathing even more difficult), so a lot of them get collapsed trachea syndrome.

Difficulty breathing weakens the heart over time, causing serious problems like congestive heart failure, cardiomyopathy, and strokes. You will hear the same distinctive wheezing, coughing, and gagging as with the other above-mentioned health conditions and a pooch should be taken to a vet without delay when it comes to having “corazon” problems.

A very contagious canine condition, which gets transferred from one affected animal to another. It is very common for a mutt to get it at a doggie daycare or a dog park as the concentration of four-legged friends is very high there. Pooches would interact with one another “sharing” parasites, drinking from the same water bowl, and licking each other, all of which are “prerequisites” for an epidemic outbreak. Symptoms include persistent dry cough, wheezing, puking, runny nose, and continuous sneezing (human-like, when we have a cold or flu).

What Should I Do If My Dog Starts Wheezing?

Hopefully, this article answered your question of “ What does it mean when a dog wheezes?” and helped you learn about all the alarming symptoms to look out for when your hound starts making strange gasping noises. No matter what the reason is, make an effort to remain calm for your pet’s sake. You need to keep your cool to follow a vet’s directions if you talk to one on the phone before bringing a poor furry creature for an appointment.

What do you do when your dog wheezes?

First thing is first: try to remain calm! I know, it is easier said than done, but you have to be collected for your pooch’s sake. Dogs always sense when their pet parent is in distress, therefore they get even more stressed out than they were initially. It is a very scary situation, especially if this is the first time it occurred with your fur baby, but try to get it together.

After you get yourself under control, try to move your pet to a well-ventilated area, open the window even if it’s cold out and place a wheezing pooch right on the blanket near the airflow. Try to take a video of what you are observing and then make a call to the nearest emergency animal hospital to see if you can bring a suffering pal in. The video you took will be very beneficial for a vet to watch before he/she examines a four-legged bud. Your dog may not exhibit the same signs at the hospital that it exhibited at home, therefore a doctor needs to see what transpired in the hours prior to an appointment.

Why is my dog wheezing all of a sudden?

There may be several reasons: seasonal allergies, collapsed trachea, a foreign object in the airways, bronchitis, and even Kennel cough. Only an animal health professional will be able to tell exactly what the wheezing cause is as well as prescribe the necessary medications.

Why is my dog making weird breathing noises?

There’s a wide spectrum of reasons: it is hot out, your pooch has something stuck in its windpipe, it is allergic to pollen(springtime is the worst time for allergies), it’s got bronchitis, or, even worse, contracted Kennel cough from one of its canine friends in daycare/doggie park. It is imperative to act quickly as soon as you noticed the weird breathing sounds and bring a suffering doggo to the nearest animal emergency clinic.

How can I tell if my dog is having trouble breathing?

You will hear distinctive wheezing noises coming from a dog’s windpipe as well as coughing, heavy panting, excessive salivating, and gasping for air. At the first signs of obstructed breathing, it is recommended to move a pooch to a cool area, place it on something soft (like a blanket or a towel), provide ventilation by opening a window/door, and call the veterinarian immediately for a consultation.