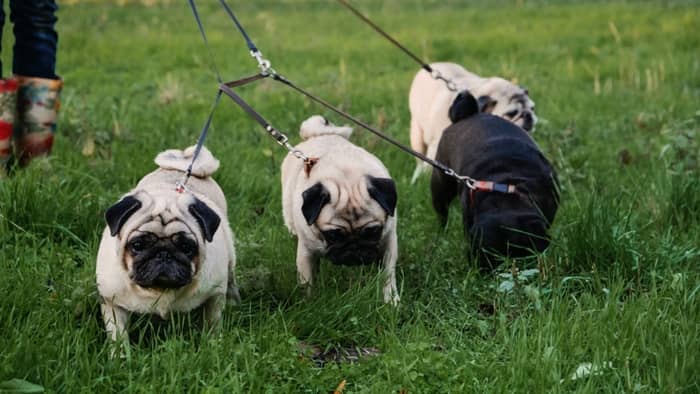 What do you call a group of pugs? Is it a pack of pugs? A puggle of pugs? Or a party of pugs? Actually, the collective noun for a group of pugs is called a ‘grumble’ (which just makes them even more endearing. Read on to find out how this came to be, other fun facts about the pug, and our alphabetical list of collective nouns that could be used for other dog breeds!

Why Is A Group Of Pugs Called A Grumble?

A group of pugs is called a grumble because of the snorting and snuffling noises that this breed makes without really meaning to, because of their pushed-in snouts. As you could imagine, having a whole bunch of pugs together making this noise would sound very grumbley indeed!

A Grumble Of Pugs

Ok, so now that we know that a bunch of snuffly pugs are called a grumble, what else should groups of dogs of the same breed be called? Here are our takes on this! 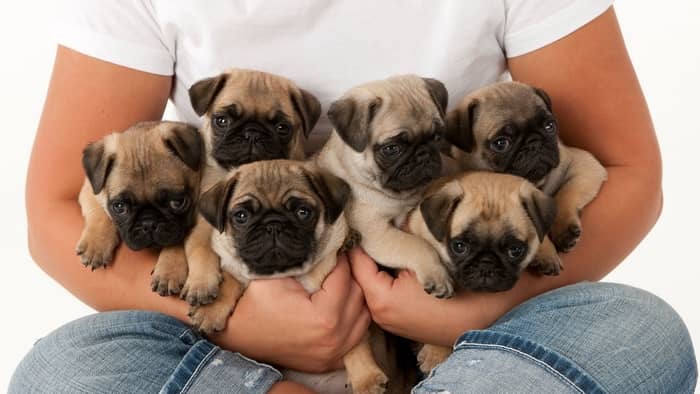 Learn more about: How Many Puppies Do Pugs Have?

An Admiration Of Afghan Hounds

For all of the admiring looks that their beauty attracts. We love those long, silken locks! More than one would be simply breathtaking.

A Of Bunker Of Boston Terriers

For Bunker Hill in Boston where they hail from. A tough little pup from a strong city, known for its intelligence and its affectionate ways.

A Clique Of Chihuahuas

‘Clique’ suits this proud little pooch! This is a group that we would be honored to gain acceptance to.

A Dapple Of Dalmatians

For their lovely spots. Dappled animals everywhere should be proud to be associated with the zany Dally.

An Envelope Of English Springer Spaniels

Now this is one letter that we would like to open! These energetic dogs would leap out, we are sure.

A Franchise Of Fox Hounds

These assiduous hounds love to run in big groups! We love their beautiful tan, black and white markings.

A Gathering Of Great Danes

A noble giant of the dog world, and who wouldn’t love to be invited to a gathering of Great Danes? 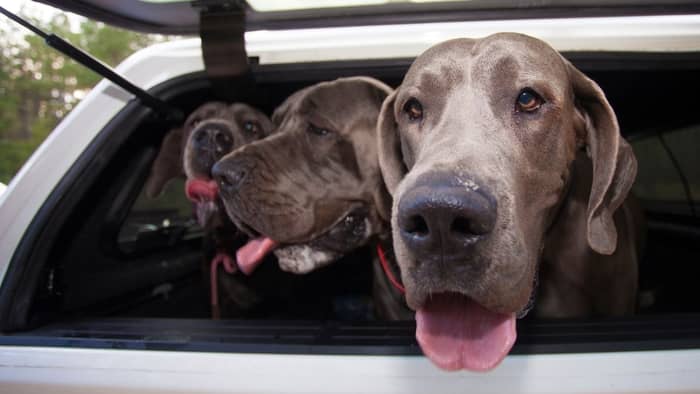 A Heritage Of (West) Highland Terriers

In honor of those dog owners with Scottish Highlander heritage. Imagine a group of Westies – cuteness overload!

An Independence Of Irish Wolfhounds

In celebration of the Republic of Ireland’s freedom from British rule in 1922. We love this gentle giant of the hound world.

A Jive Of Jack Russell Terriers

Can’t you just imagine jiving around with a bunch of these little live wires? If only we could keep up!

A Kingship Of Kelpies

The Australian Kelpie is the king of the Outback, and if we were in the Australia desert there is no other dog we would rather be with!

A Luncheon Of Labradors

We figured that the word ‘luncheon’ was suitable for the loveable Labby because as anyone who owns one knows, they sure do love to eat!

A Mischief Of Maltese Terriers

A group of cheeky and mischievous Maltese Terriers would not be for the faint-hearted! Just one of these white fluff balls is enough to keep us on our toes.

A Niche Of Newfoundlands

And a niche that anyone would be happy to fill, in order to hang out with this gang of big and beautiful dogs. Newfoundlands are known for their intelligence, strength, and loyalty.

An Opera Of Old English Sheepdogs

A gentle giant and a favorite of children everywhere, we think that the Old English Sheepdog deserves to have music written about them. Entire operas, in fact!

A Of Puddle Of Portuguese Water Dogs

What else could you call a group of soggy Portuguese Water Dogs after they come out of the water? We love their curly coats.

A Quandary Of Queensland Heelers

Also known as the Australian Cattle Dog, this stocky working dog is a champion when it comes to moving cattle across vast distances in the blazing sun. Australian farmers would be in a quandary without them!

A Riddle Of Rhodesian Ridgebacks

This mysterious-looking dog would be the ultimate puzzle to solve if found in a group. We especially love the ridge of hairs on its back that give it its name. The Rhodesian Ridgeback is so brave it used to be used to hunt lions.

A Storm Of Samoyeds

Or should that be a snowstorm of Samoyeds? A bunch of Samoyeds in the snow may be rather hard to spot, but they sure would keep you warm! You couldn’t ask for a cuter bunch of fluff balls to hunker down with.

A Tribe Of Tibetan Mastiffs

This is a tribe that we would love to belong to. The Tibetan Mastiff is a rare and imposing dog that fetches huge sums of money due to their lion-like appearance.

The Utongan is a mixed breed of dog that counts the Siberian Husky and the Alaskan Malamute amongst its ancestors. With that kind of breeding, the Utongan has you covered!

A Vacation Of Vizslas

We would love to go on a holiday with a group of these stunning Hungarian sporting dogs. This loyal dog would love to hang out with us too, no doubt.

A Wipe-Out Of Whippets

Have you ever seen a whippet run? How about a whole bunch of whippets? ZOOM! Blink and you’ll miss them! Just trying to keep up would be a total wipe-out.

You will exclaim when you see this dog, A.K.A. the Mexican Hairless Dog. Once you get past the fact this dog is bald (well some, not all have the hairless gene), you’ll love to hang out with them.

A Yelp Of Yorkshire Terriers

The cute and feisty little terrier might be small in stature but they have huge personalities. So imagine what a whole heap of these grey and gold pups would be like?!

The Zuchon is a hybrid dog that combines the Shih Tzu and the Bichon Frise. This toy breed would have us zig-zagging all around the house and backyard if there was more than one of them!

Read more about: There Are Many Good Names For Pugs