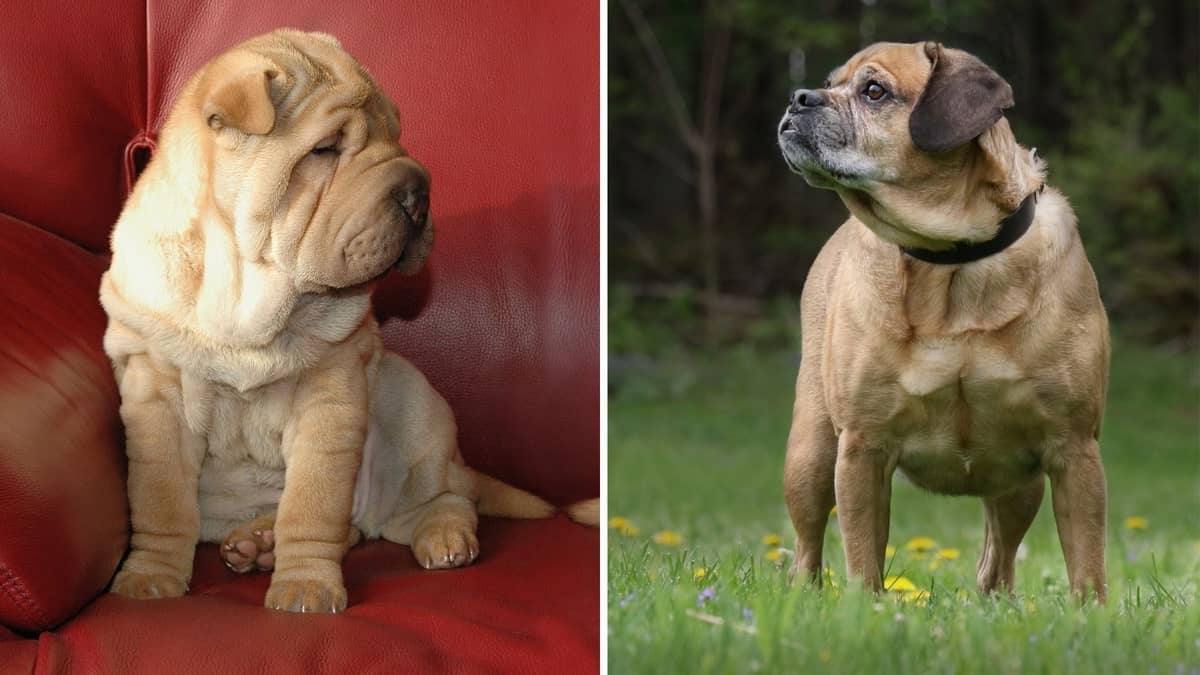 Shar-Pei Puggle Mix dog, a very peculiar designer dog breed which is a cross between a heavily wrinkled Shar-Pei, a lively Pug, and an “always merry” Beagle. A Shar-Pei Puggle Mix dog has distinctive Asian blood, particularly Chinese. It gets its Asian roots from a Pug and the Shar-Pei parents. The European blood is also in the mix here: a Beagle has its roots in England.

The first part of the breed’s name translates as “sandy skin,” as their coat is very rough to the touch. The second part, “Puggle,” combines the two breeds: a Pug and a Beagle. They inherited the characteristic Asian relatives’ (a Pug and a Shar-Pei) wrinkles. However, instead of concentrating on the dog’s muzzle, they are covering the whole entire head and even neck area. The eyes are a little “buggy,” not as much as the Puggle’s peepers and they have a cute button nose. The face is a lot more elongated compared to its Pug parent, which prevents breathing issues as nostrils are much wider and allow for a normal oxygen flow.

Puggle Shar-Pei mix puppies got their guarding and protecting instincts from a Shar-Pei ancestor. The latter was almost at the point of extinction in the 1900s, as there were only 60 Shar-Pei dogs left on the planet. At some point, it was considered the rarest breed to ever exist. But how did it start for Shar-Pei Puggle mix dog? What about its origin?

As in the case with many designer dog breeds, very little is known about the Shar-Pei Puggle mix pooch. It is unclear when and where the interbreeding of the two dog species started, but we have a lot more information about the parent breeds. Let’s dig into their history.

A breed is known to be worshiped by the Chinese Han dynasty and it is one of the oldest on the planet with the first mentioning at about 200 BC. Even though the initial breed didn’t look like a wrinkled pal we know now, it was indeed the ancestor of the modern-day Shar-Pei pup. The difference between the ancient breed and its modern version is that the Shar-Pei’s face is more “meaty” now, with a quite massive jaw.

Some European travelers named the breed “ Chinese fighting dog,” as it was used in dogfighting matches. The breed was almost wiped out from the face of the Earth, as briefly mentioned above. Yet, the crossbreeding of Shar-Peis with other similar breeds (particularly from the Mastiff family) stopped the extinction process in its tracks.

Today you can spot this adorable wrinkled fella in many European and US homes. Although this breed may not be as popular as it used to be, it is known for its friendliness, loyalty, and inherited protective nature. All of these are appealing to many families with kids. 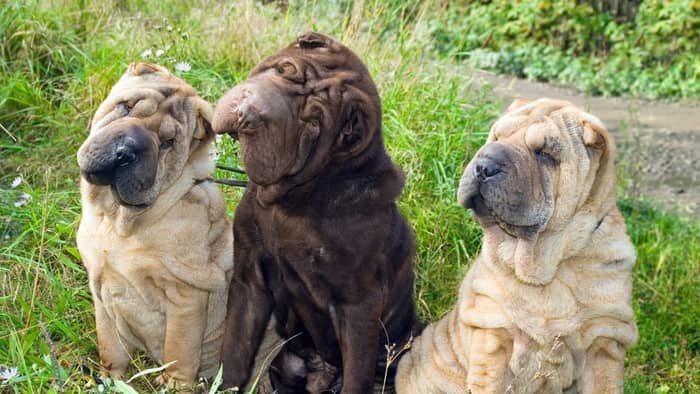 Going back into the Puggle breed’s history, we’ll find that they have both Asian and European roots. To be precise: a Pug is from the Celestial Empire and a Beagle originated in medieval England. The former breed was extremely popular with the English queens, and some of them even started breeding Pugs themselves (like Queen Victoria, for instance).

A Beagle and a Pug were first crossbred in the late 1900s, by a designer dog breeder located in the state of Wisconsin. He had a lot of breeding experience already by the time the Puggle dog emerged.

Then, the ACH Club registered the new Puggle breed and the standards were agreed upon that this hybrid had to adhere to (ideal height, weight, intelligence skills, etc.). 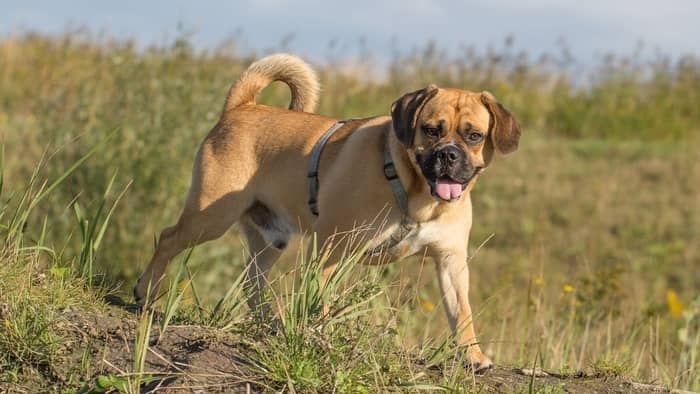 Learn more about: How Much Does A Puggle Cost?

Also, Puggle Pei pooches can be born with respiratory, cardiovascular ailments, hip dysplasia, thyroid issues, and even develop epilepsy. Puggle DNA is to mostly blame for those.

If you are looking for a good guard dog, have teenage children, want to have a loyal, devoted companion, and a “partner in crime” as well, look no further! Shar-Pei Puggle mix dog is your choice in this case. Make sure you take it to the vet to detect any health problems described above since early detection will aid in an effective treatment plan. You will never have to worry about your house being robbed because this hybrid pup will be protecting it like the best security guard on Earth. It is a great family dog choice, who will fit right into the “pack” and bring some new, exciting colors into its pet parents’ lives!