Pugs mixed with Chihuahua, as the name suggests, are dogs who have two different-breed parents: a Pug and Chihuahua. Very often this mixed-breed dog is referred to as a Chug for the ease of pronunciation. Other names may include Pugwawa and Pughuahua. I personally like Chug better, just easier to say it.

It is considered a designer dog breed meaning that its breeding was intentional. It is done to create another toy dog that would supposedly take the best traits out of the two parent breeds.

Also, to minimize some of the health issues that both breeds suffer from. In the case of a Pug, they include cherry eye, skin rashes, and respiratory problems because of the breed being brachycephalic (big-headed). Some of Chihuahuas’ issues include kidney stones, obesity, and gum disease.

Pug mixed with Chihuahua is a toy breed just like its ancestors and rarely reaches 12 inches in height and weighs no more than 20 pounds. Its colors vary from apricot-peach and fawn to chocolate brown, and even black (very rare, by the way).

So how did it all start with this cutie-pie miniature breed? Let’s take a look at the Chug ancestors’ history first: the Pug and the Chihuahua.

There are no real significant differences between the Techichi and Chihuahua breeds, mainly just the size. Techichi used to be much bigger than Chihuahua, but with evolution, the breed got smaller and its coat got shorter as well.

In the early 1800s, the Mexican breeders started to actively develop the Chihuahua species as we know it today and supply it to the American market. The breed got its name from the Chihuahua state, the largest one in Mexico. It borders New Mexico and Texas, therefore these two US states got introduced to the breed before any other states were.

It is still unclear to this day who the initial breeder of Chugs was. But what we do know is that the very first Chihuahua Pug mix developed in the late 90s-early 2000s. The country of origin was most likely the United States as all toy breeds were in high demand with the fashionistas right around 2000-2004. Who doesn’t remember the heiress and socialite Paris Hilton bringing her tiny Chihuahua to all major showbiz events? She and her dog were all over the tabloids and that’s what helped some of the main toy breeds to become extremely popular. I personally think it is wrong to make a dog your accessory, but this was a crazy trend back then.

And what about Chug’s character, what is it like? It has taken a lot of good traits from both the Pug and the Chihuahua parents. Pug has given it its lively, curious, and friendly nature, always willing to cuddle. Chihuahua gave it its love for life, witty, sometimes dorky nature, and very sociable, but independent charisma.

So independent, that sometimes it’s funny to watch Chugs act like they are large dogs. I guess they get a little of the Napoleon complex going on: the smaller the dog, the louder the bark. A Chihuahua Pug mix puppy has to let every other dog who crosses its pathway know “who the boss is.” Adorable at first, it can become a problem later if a pet parent decides to leave its Chug in a kennel or bring it to a dog park. Some other pet owners may not like a Chug bossing their bigger dogs around.

And the barking we have mentioned earlier: it can be out of control with Chugs. They get it from their Chihuahua ancestor, who would bark if it was simply excited about something. Pugs mixed with Chihuahua are the same. Therefore if an owner finds it annoying, they should train their Chihuahua Mixed with a Pug pal to keep it down by using positive reinforcement.

Chugs tend to get stubborn at times (that’s from the Pug parent). However, they are trainable if a pet parent’s requests make sense to the pup. It has to understand the purpose of commands and see the benefit in it (getting rewarded for good behavior). Some might call it “bribing,” but hey, whatever works to keep the furry pal in check, right? 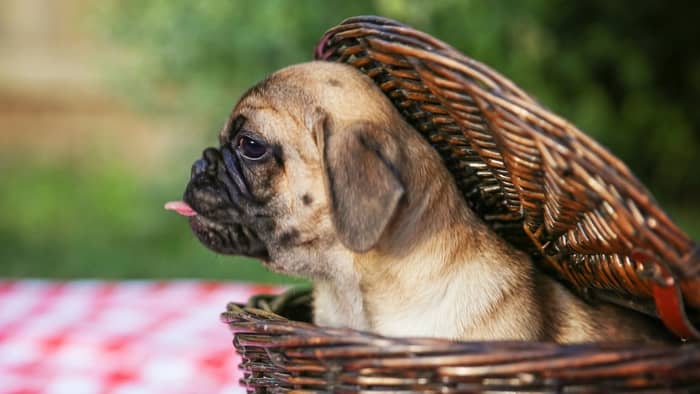 Taking Care Of Chihuahua Mixed With A Pug Breed

Before you give your Chihuahua Pug Mix pup any kind of food, you should always consult a veterinarian specialist to see what type of food he/she will recommend for your pal’s breed type. Typically, vets highly advise giving out the Hills Science Diet dog food. The reason being that it has a lot of great nutrients like essential vitamins, minerals, and fiber to make sure your pup grows up to be very healthy as well as fit. Make sure not to overfeed your pooch, follow the vet’s directions as far as the feeding schedule is concerned.

Your mixed breed friend has 2 breeds coexisting in it. Consequently, it might develop the same problems its ancestors had or even all of them. Some of them may include eye, respiratory and digestive problems, as well as obesity issues. You just never know. Therefore, it is very important for you as a pet parent to take your pal for regular checkups every year to make sure everything looks normal. The Pug mixed with Chihuahua pup’s lifespan is about 10-13 years taken that its pet parent looks after his/her fur baby.

A Chug breed doesn’t necessarily need a lot of daily activities. But daily walks are extremely beneficial to keep your pup energetic, fit, and less prone to destructive behaviors. A bored dog is a recipe for disaster.

Be sure to provide mental stimulation as well, like dog puzzles or Kong toys. Fill these with some peanut butter, cheese, or mashed potatoes, and your Chug fur baby will sit there for hours, trying to get every last scoop out.

A Chug fur baby may not be the worst pet option if you want a lovable, social and loyal dog. The only main issues they have are excessive, overwhelming energy, and out-of-control barking. These have to be addressed at an early stage to make sure they don’t develop into something more serious like resource/people guarding, or open aggression. Make sure you provide your Pug mixed with Chihuahua friend with good nutrition and enough daily exercise to keep it in the best shape possible.

Happy bonding with your Chug fella!

Read more about: What Is A Pug Mixed With Poodle