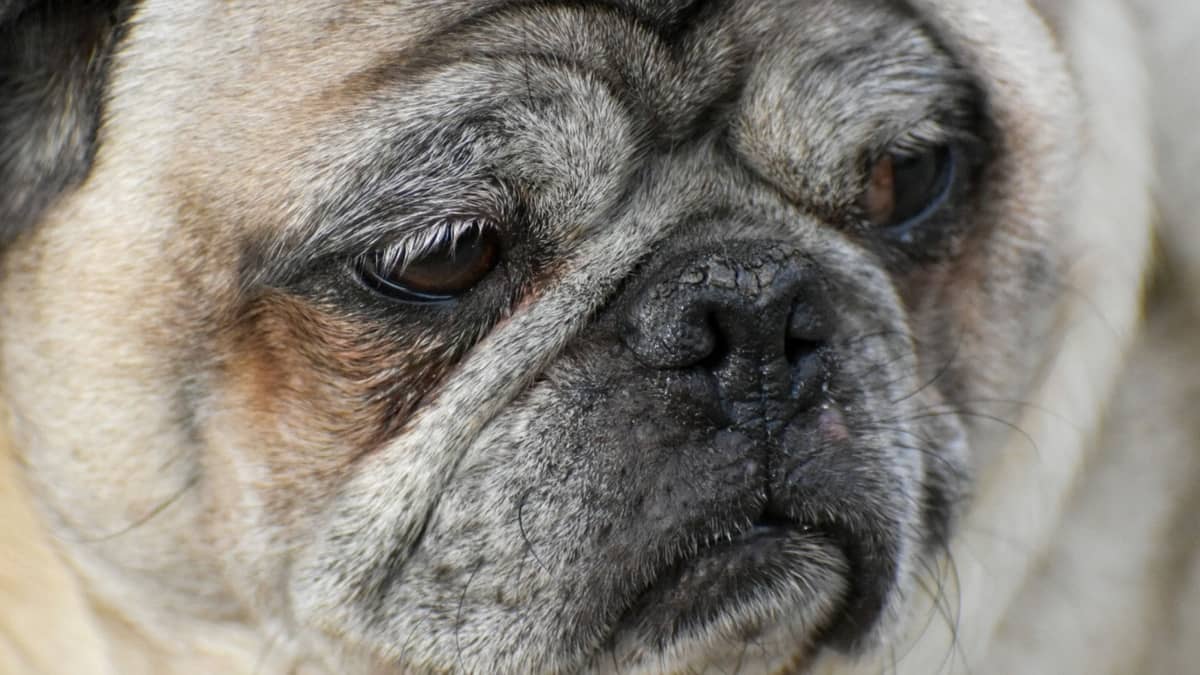 Pugs and their adorable wrinkles are very hard to resist! Just ask any Pug owner, they will confirm I’m sure! They are known for those cute folds, going around the whole body.

Yet, they are especially abundant around the face. Our wrinkled friends look extremely cuddly as well as wise, like a dorky mad scientist. When Pugs are still in a puppy stage, the wrinkles are not as numerous.

They are still undergoing their transformation. However, when a Pug is fully developed, the facial folds can become quite pronounced. Not to mention the skin health problems they, unfortunately, are causing.

Some of them include a Pug-nose fold infection and a lip fold pyoderma. We’ll look at those in detail now together with the other main skin problems Pugs develop as a breed.

Pugs and the Common Skin Infections They Can Get 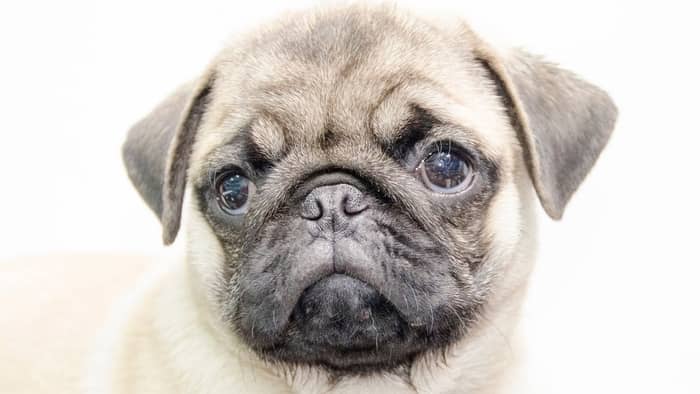 This skin infection is not as uncommon in canines as one might think. It is not unheard of to get it for a human, pretty common actually. Dogs can be just as susceptible as their two-legged masters.

Symptoms of psoriasis include sections of very dry, parched skin, and the affected spots are all red as well as flaky. What are the reasons for the development of such a condition one might ask? Normally, Psoriasis is triggered by stress and/or weak immunity.

What happens is that healthy cells get replaced by abnormal ones. A canine body wrongfully regards the former as dangerous and they get attacked by mistake.

It is very stubborn for treatment in both the two- and four-legged, but it is not impossible to completely get rid of it. Special kinds of medicated creams, gels, and ointments can be prescribed to deal with the outbreaks. Also, one might have a second look at his/her lifestyle together with diet to see what can be modified to effectively fight this skin problem. The same goes for canines-less stress and a healthier diet might be the answer.

A very common Pug wrinkle infection. They are known to have sensitive skin, therefore can develop derma issues easily. Why? Blame all those cute soft wrinkles that lead to dog skin fold dermatitis.

Bacteria that are harboring right in between the folds multiply rapidly due to the moist, dirty, and warm conditions. It is the perfect environment for any type of skin infection if a pet’s derma is not properly cleaned. Also, parasite infestation can be another valid reason for dermatitis’ development.

Symptoms include severely irritated, and very dry patches of skin your restless Pug may be vigorously scratching to no avail. Your poor mutt would be itching non-stop, even rubbing up against the furniture.

To prevent dermatitis, an owner has to make it a habit to wipe his/her Pug’s folds with a damp cloth regularly. This ensures that all the “gunk” collecting right in between wrinkles becomes history.

Include a Pug-nose fold infection as well as other parts of a wrinkled’s body that have those very wrinkles. Pretty much it is the dermatitis infection that specifically targets the flat-faced dog’s facial folds compared to the general dermatitis variant that can also appear as a result of a parasite attack. You will note that your suffering four-legged would be constantly scratching itself, aggravating the infection even further.

They form when a pup starts excessively licking on its irritated and, in some instances, broken skin, introducing bacteria and fungi right into the wound. Short-maned canines are susceptible to them more than long-haired ones. To prevent further damage, it might be necessary for a pooch to wear a recovery cone collar. It will stop further desperate licking attempts.

Very similar to skin scab’s condition in the sense that the pooch is partially to blame for its development. As the title suggests, it is a skin condition where a Pug’s lips get infected because of all the scratching it is doing around the lip area. As its pout gets badly irritated, it starts to bite/itch at it, causing even more damage.

The bleeding at the affected area becomes a free pathway for the bacteria to enter a dog’s body. As a pooch licks off the blood, the fold pyoderma spreads right through the bloodstream.

Not just Pugs, but other pancake-faced breeds like Bulldogs, Pekingese, and Shih-Tzus are also susceptible to the lip fold pyoderma. A Pug-nose fold infection falls under the same facial dermatitis category worth mentioning that wrinkled furry creatures are suffering from. All for similar reasons as the lip one: gunk collecting in the nose wrinkles that have not been cleaned properly.

Now, is there a way to prevent all of the aforementioned dermatitis types from happening? What are the steps a pet owner should take to help nib them in the bud? Most certainly, it is possible! Let’s have a look.

As in the case of people, proper hygiene is equally important with canines. You will actually see them licking themselves often paw-to-tail, especially after an active outside play or a fun day out in the doggy daycare. Dogs are very clean creatures and this is their way to “bathe” themselves. Nevertheless, some spots might be still hard to reach: lip, eye, and nose areas.

And if we talk about any brachycephalic breed like Pugs or Bulldogs, it is especially hard for them to keep up with their cleaning routine simply because they can’t properly reach in between those face skin folds. That’s when a pet parent comes into play. They have to be the ones wiping down those cute wrinkles for the pooch to be happy and healthy as well as avoid skin conditions like a Pug-nose fold infection.

Even though Pugs don’t need to take baths often, it is an absolute necessity if any foul smell/weird discharge is noted in/around their skin folds. Choose a mild, tearless dog shampoo for the best canine bathing experience. It might also be a good idea to reward your fluffy bud if it is properly behaving in the tub and trying to stay still. Taking baths is really not one of a Pug’s favorite pastime ideas, therefore a treat will go a long way!

Closely examine your pal’s skin surface at least a few times a week to see if any weird-looking, flaky patches started to appear. Pay special attention to the facial folds around a Pug’s lips and snout. The dry spots could be the first signs of one of the derma’s troubles we’ve mentioned above, including Pug-nose fold infection. 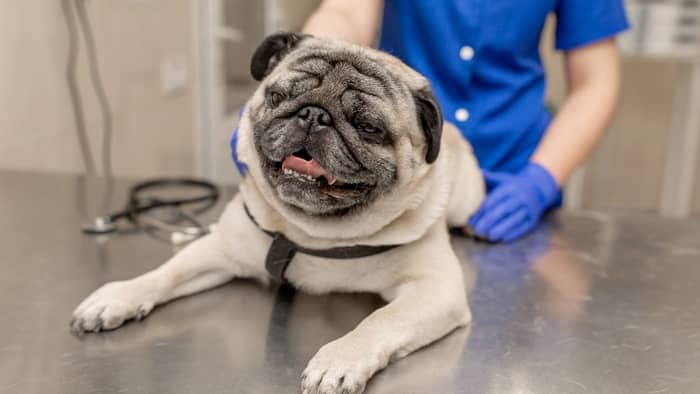 Goes without saying. Regular vet visits are a necessity if you intend to have a healthy, dermatitis-free furry friend. A professional will be able to tell exactly what some of the trouble spots are and prevent a beginning infection from spreading further.

Pugs are notoriously known for being prone to various types of bad skin conditions. Unfortunately, it is a part of a breed’s makeup, it’s in their DNA if you may. Hence, it is so important for a parent to be on top of his/her companion’s wellbeing, including regular skin inspections and yearly professional check-ups.

It is better to implement preventative measures than let a poor Pug suffer through intensive antibiotics’ course. Or, even worse, medication shots. Be wise about canine health and your efforts will pay off in the long run!