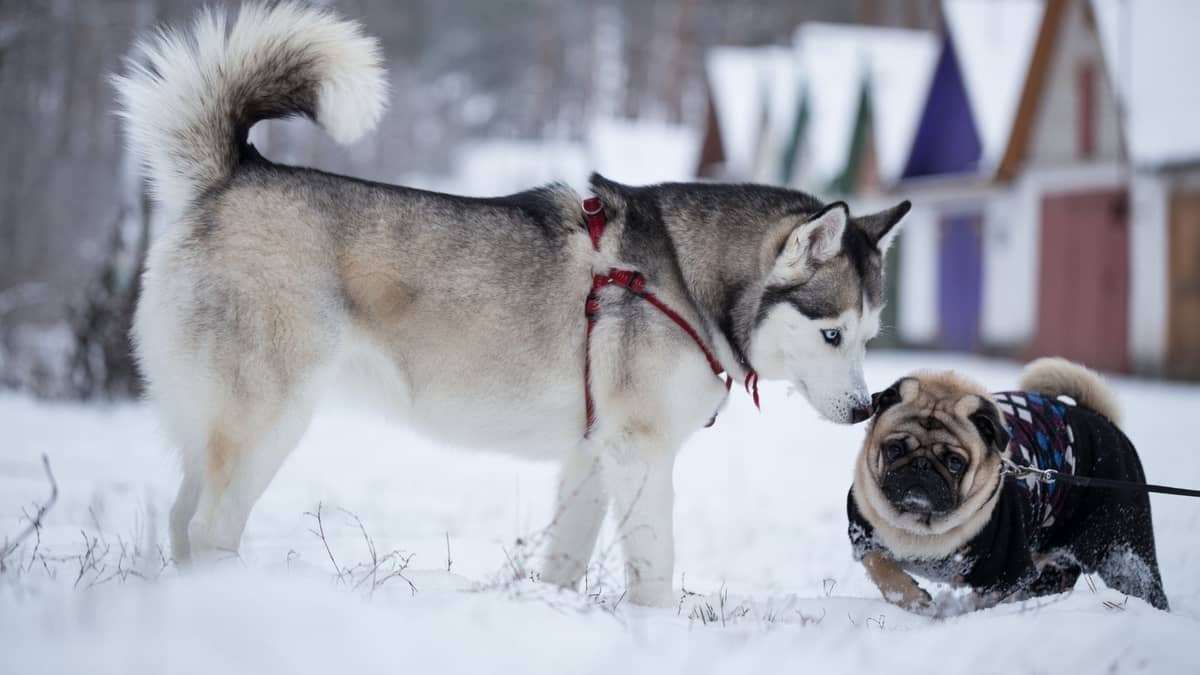 Pug mixed with a Husky…very peculiar combo, don’t you think so? But such a designer breed does exist, believe it or not. When you look at the two breeds separately, you will notice how different they are in everything: size, color, weight, face shape.

But one thing they have in common: the unconditional love for their masters, and extreme friendliness. The bulge-eyed, button-nosed Pug meets the blue-eyed beauty of Husky. What we get is not only referred to as Pug Husky mix but also a very cuddly term: Hug. Isn’t that something!

Hugs deserve a lot of hugs…, and kisses! Before we dive into the specificities of Hugs, let’s take a look at each crossed breed individually to have a better understanding of the Pug mixed with a Husky pup.

Small, stocky body, short, but very strong legs, and the flat, wrinkled face with those big bulging brown eyes. This is the adorable pug breed. They reach anywhere from 6 to 13 inches in height and weigh anywhere from 10 to 18 pounds. Quite small, but very nimble breed, if you ask me.

Pugs were first discovered in ancient Egypt, where they were worshiped as sacred animals. Then they traveled to Europe with several Dutch merchants, and quite a few Royal Homes absolutely adored them. Some of the royal fans included the Dutch, the English (with Queen Victoria as the self-made Pug breeder), as well as the French monarchs. The royals in turn got them from the Chinese. Many generations of Emperors were proud to call pugs their companions.

They would be a great match for first-time canine parents because pugs are very easy to train and care for. There are no training issues usually with this breed as they are very loyal and obedient to their owners. Pugs tend to be on a mischievous side from time to time, but this fact just adds to their charm. Pups typically grow out of it once they hit adolescence.

Lustrous grey (or black) coat mixed in with some white, perky ears, strong composure, and those irresistible piercing blue eyes. This is the beautiful Husky breed. They are considered a quite popular family breed in the States, as they are generally very friendly, sociable as well as extremely cuddly (being so fluffy, it is hard to resist not hugging them).

Huskies originated in the Chukchi Peninsular in Eastern Siberia. They are a mixed breed of a Russian Laika and a Spitz, the very furry dog breed. The Chukchi tribes used them as sled dogs to get through the almost impassable Siberian woods and for personal protection. Pretty soon Huskies became their true companions and the main means of survival.

They were transported to Alaska in the 20th century for the same purpose they were used in Siberia: transportation in the harsh winter climate. Also, they were actively used in dog races, competing against one another.

Although they are not very good hunters and guard dogs, they can always defend themselves or their owners if a great danger comes their way. Normally, if raised and trained properly, they are very good family dogs and get along with children great. They rarely bark, but some Siberian Huskies tend to howl loudly, if they hear a wailing noise, like an ambulance siren, for example.

It is not very clear when the Pug mixed with a Husky first surfaced, but what is know is that it happened relatively recently: somewhere in the early 2000s. It is unknown who the first breeder was either, unfortunately.

Since you combining two very different breeds, it is going to be unclear what Pug Mixed with Husky puppies will look like until they are born. What is known for sure is that the mother of the litter is always the Siberian Husky female. The reason for that is difficulties during birth which come up when a female Pug is in labor. Very often the latter will undergo a C-section to successfully deliver her litter. Huskies, on the other hand, do not have such complications and can deliver babies naturally. Let’s take a look at the possible color, size, weight, temperament, and trainability of the Pug Mixed with a Husky breed.

1. Color: can vary from beige, silver, brown to black and white. Since it’s a mixed breed, you won’t know what color the pup is going to turn out. It depends on its genes: if the Husky DNA is prevalent, then a mixed pup will have more of the silver, black and whitish undertones. On the contrary, if the Pug’s genes take over, you will see more of the beige, brown, and fawn in your pup. The color of their eyes can vary from sky-blue to light brown. And even two-colored eyes, that is also a possible combo!

2. Size: can vary. Anywhere from 10” to 24” in height. The Husky Pug mixed puppy is going to be much bigger than the regular Pug, but smaller than the Husky parent. Usually, these pups are much more muscular thanks to the Siberian Husky strong genes.

3. Weight: also varies, depending on the dominant parent genes. The weight range is somewhere in between 13 lbs and as much as 60 lbs!

4. Temperament: the Husky Pug puppies are very friendly and loyal dogs. But yet again, depending on the prevalent DNA, your pup can be either very independent, like its Husky parent, or very sociable, like the wrinkle-faced relative. The two mixed breeds were raised for two completely different purposes: the Husky-for working as a sled dog together with the other blue-eyed counterparts and a Pug-for companionship, and pet parent’s enjoyment.

5. Trainability: Pug Husky mix is not the easiest breed to train. The reason is that it tends to take after its Pug ancestor when it comes to stubbornness and the extreme independence trait from the Siberian Husky parent. You have to start the training process when your Hug canine pal is still a baby. The earlier you start with the basic obedience lessons, the quicker a Pug mixed with a Husky pup will learn and progress. Make sure to use the positive reinforcement tools more often: you get immediately rewarded if you do the right thing.

So we have just covered all the details about the Husky Pug mix puppy you wanted to find out. They may not be the most obedient, the prettiest, or the wittiest. But one thing is for sure: they are one of the friendliest breeds you can get. Be consistent with the training process, show your Pug mixed with a Husky pal the reasoning behind each command, and always reward your fur baby to make good training associations.

Read more about: Is The Pug and Dalmatian Mix Right For You