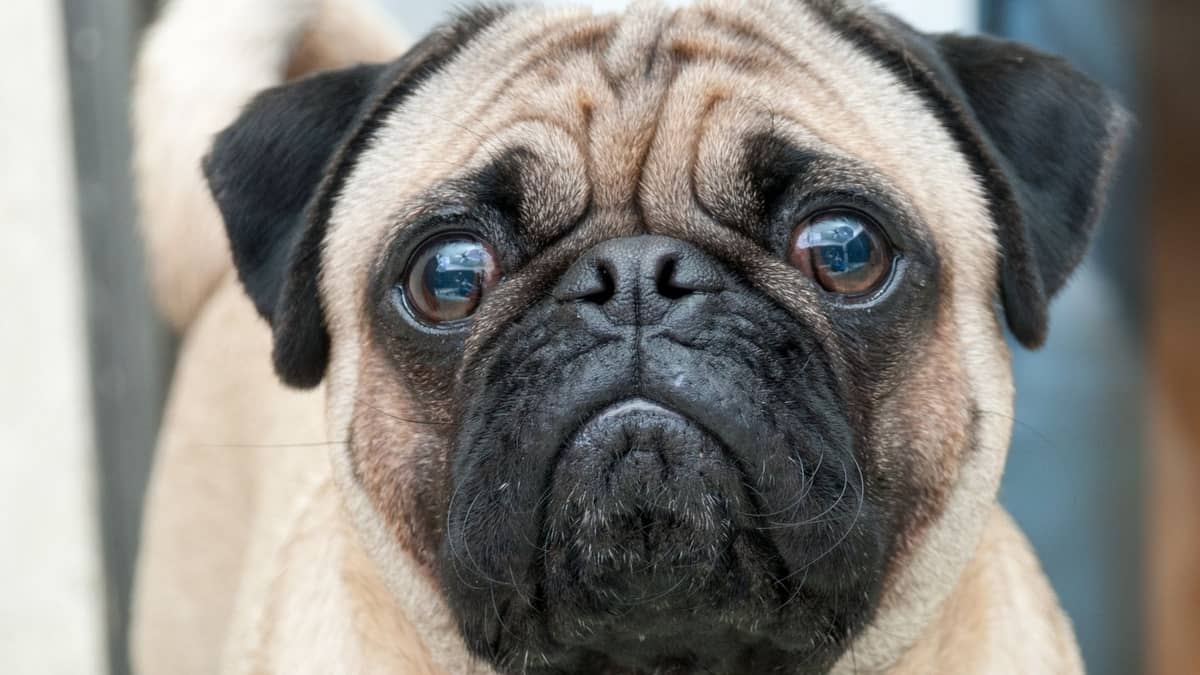 If you are one of the many Pug enthusiasts, you know very well that these pooches come in a variety of colors. It is really a matter of personal shade preference or whether a future dog owner wants a purebred dog or a mixed one. Some mixed-colors Pugs are even more expensive than the “original” ones since their colors are considered “exotic,” or “hip”.

In case you are unsure which one you want to go with, read on and find out how many Pug coat types are out there to pick the desired color you want. It is, by all means, a wrong strategy to choose a mutt only based on its coat shade. However, a Pug’s character, demeanor, trainability, and even health will fully depend on it.

How? Let’s cover that. 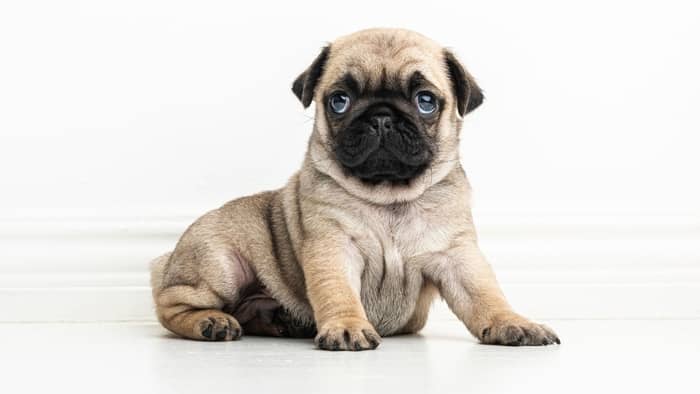 Some future pooch owners prefer to only get a purebred puppy from a reputable breeder. Meanwhile, others don’t mind getting a mixed one. The former will be limited to only black and fawn colors. Whereas the latter will have many more shade options to choose from. Let’s talk about each in detail.

Traditionally, Pugs came in black and fawn colors and those same ones are the standard shades recognized by the American Kennel Club (AKC). Only those pooches are allowed to enter competitions and participate in various American National Championships. And by “fawn” one should picture shades anywhere from a light creamy/beige to a deep gold one.

Pure Pugs are very friendly, cuddly, and great with children. Therefore they can become a great addition to any growing family. They don’t have the energy that some mixed Pugs have (like a Puggle, for instance), which makes them perfect lap dogs.

Since they don’t require much exercise, they will be very suitable for small-spaced areas like a studio apartment or a condominium. And retirees can truly find a wonderful companion in a Pug who loves to snuggle, taking naps right next to you.

One of the biggest downsides of an original Pug is that they develop many ailments like eye, ear, and skin infections as well as lung, heart, and joint issues. To help change that, Pugs started interbreeding with other canines to create a healthier litter.

Have you heard of a Puggle, Pugador, Frenchie Pug, or a Hug(Pugsky)? These are all examples of Pugs crossed with other breeds. Breeders started doing this to prolong the latter’s lifespan and make future offspring are born healthier in the long run.

As this interbreeding practice shows, mixed Pugs are indeed stronger physically, have fewer health problems, and are more energetic. In some instances, even have better trainability than their pure counterparts. Usually, a larger breed is the one picked to be a mom and a Pug becomes a future daddy.

The reason why is that a female Pug has problems delivering because of her reproductive organs’ small size. Hence, very often a wrinkled mom has a C-section to help her deliver furry babies. Now, what about hybrid Pug colors?

These fur babies’ color palette is a lot more abundant than purebred counterparts which only have fawn and black as the standard color options (as we’ve covered above). Mixed Pugs come in white, merle, brindle (tiger-striped), blue, apricot, black/white (Panda Pugs), and many more variations. It depends on whose blood is intermixed with a Pug’s.

Sometimes a multicolored wrinkled fella would cost more than its original “cousin,” even though it is not purebred. Let’s take a closer look at each color combo separately to see why Pugs get it in the first place and talk about each variation’s peculiarities.

A very rare and extremely pretty Pug shade, most likely a result of a Pug and Bulldog or a Pekinese intermixing. It is very often regarded as an Albino Pug, however, this is not exactly the case. The former has little to do with the latter since white Pugs have a darker eyeshade, a black/grey nose, and a noir spout. In some instances, their paws will be blackish as well. An Albino fella will have light peepers, snout, and paws.

One of the prettiest Pug shades, hands down! An actively sought out and one of the most expensive colors you can get in a pancake-faced. A speckled, spotted pattern unravels intricately on a Pug’s coat, giving it an extremely unique appearance.

One can see a white/black merle combo, a grey/black, or even a black/fawn one. The reason for such a peculiar shade is a cross with a Chihuahua that can be traced centuries ago. If you see a merle one with blue peepers-consider yourself very lucky as it is a rare sight to see!

This is by far the most expensive hybrid Pug shade you could ever find. It is a rarity to find a flat-faced pal with a brindle shade. If you spot one somewhere, it is almost a guarantee it was mixed with a Boston Terrier or a Bulldog.

Brindle color can be best described as “tiger stripes,” even though it is not 100% accurate. A Pug’s stripes are a lot more blended in and not as pronounced as in the case with their feline fellows. Possible brindle color combos include grey/brown, black/red, black/white, and so on.

Unfortunately, these beauties cannot compete in National Championships as brindle is not an officially AKC-recognized shade.

A very black Pug whose coat color appears almost blue if seen in the daytime/bright sunlight. Normally, this deep noir shade is usually a result of intermixing two black Pug parents. Yet, it can also be a result of crossing a blue-shaded canine with a black wrinkle-faced. It is not very often you see a blue Pug, therefore this color can be easily put on the “exotic” Pug shade list.

A not-so-rare color on wrinkled buds nevertheless is a very “juicy” shade. It has warm orange undertones, which make a Pug look like a bundle of sunshine. You can get a deep golden shade like that by having at least one of a pup’s parents with a dominant black and a recessive brown gene.

Any panda fans who also happened to be crazy Pug worshipers reading this? If affirmative, this color on your future puppy might be exactly what you were looking for. A “panda” shade is a variation where you have a mostly white Pug with a black “visage”.

Its eyes would typically be surrounded by black circles and the ears would be noir as well. On some occasions, you might notice a few black spots on its back. 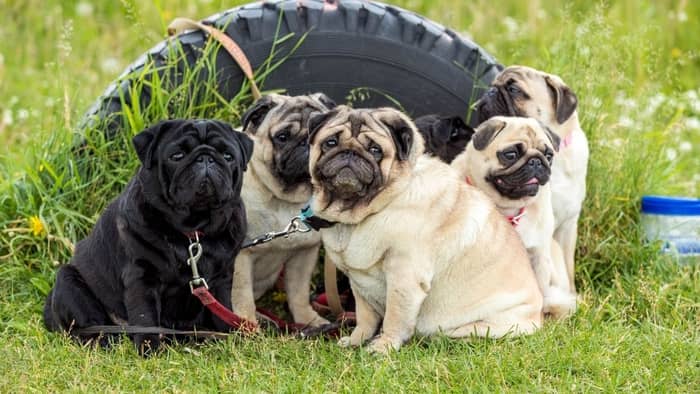 It is really up to the future owner to choose the one desired color out of many Pug coat types. Some prefer to deal only with the respectable breeders who particularly work with pure Pugs’ colors like black and fawn. Meanwhile, other future Pug parents don’t mind (and are seeking) a peculiar color combo like brindle, merle, or panda.

Just keep in mind that a hybrid pup would be a lot more expensive as some Pug coat types are almost on the “extinct” side. Nevertheless, you will definitely become a proud momma/papa of a very unique pal who will be the center of attention anywhere you go!