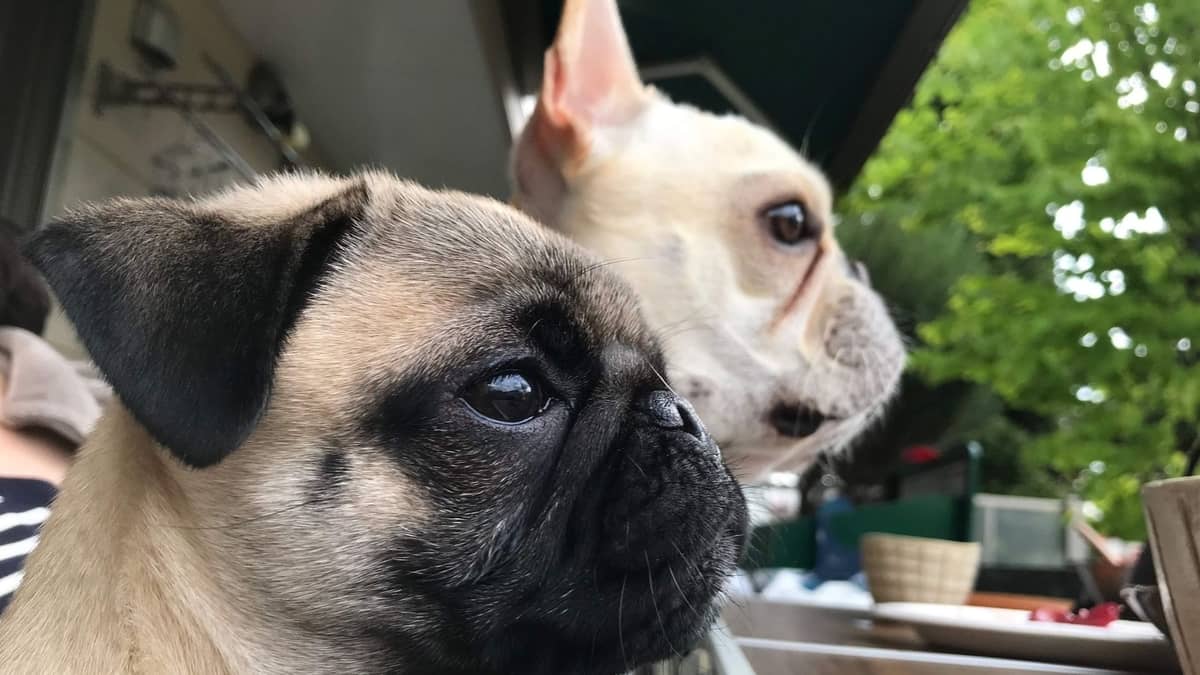 Are you curious to know what other dog breeds look like a pug? Well, there are quite a few. They do vary in size, markings, coat length, and of course temperament, but they all have the same short muzzle as the pug.

Pug-like dogs abound due to selective breeding, resulting in a dog with a short muzzle. These ‘short-nosed’ pug-looking dogs are all brachycephalic, (which is Greek for ‘short head’) meaning that they have a short muzzle. This gives the dog’s face a teddy bear-like appearance.

Some people find pugs and pug-looking dogs irresistibly cute for this reason, but the term brachycephalic also indicates that any breed with this condition may sadly suffer from respiratory distress, particularly in hot weather. This is because the air does not have a long way to travel between the mouth/nose and the lungs, meaning that this air does not have enough time to shed carbon dioxide. So always bear this in mind before committing to getting one of these dog breeds as a pet.

These pug-like dogs were developed in the 1800s by crossing a Bulldog with an English terrier. They are referred to as the ‘national dog of the United States because they are considered the first true American dog breed.

The Boston Terrier is taller and heavier than the pug, and their ears stand erect (unlike pug ears which fold.) But they do have the protuberant dark brown eyes that the pug has, and the short muzzle.

This dog makes a lively and affectionate pet. 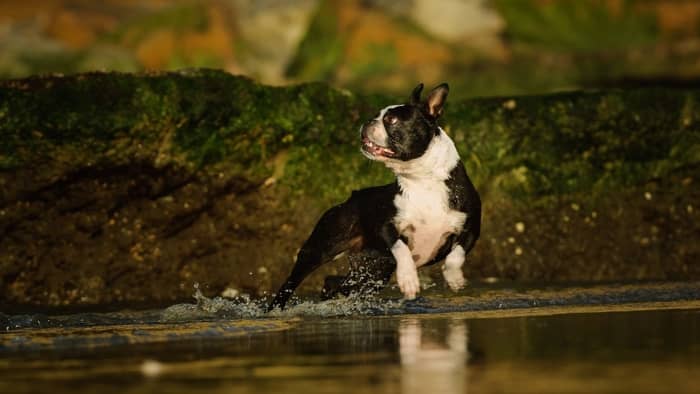 If you popped a Boston terrier’s head on an English bulldog’s body, then you can probably imagine what a French Bulldog looks like!

In the 1800s, immigrants from England went to France and they needed a dog breed that could prevent rat plagues on their farms. So the French bulldog was developed from the bulldogs that these people brought with them.

These dogs are short and stocky, with widely spaced front legs. Once again, they are pug-like dogs in that they have the pushed-in snout and the big brown eyes! Their ears stand erect.

These pug-looking dogs love to be at home with their human, lapping up lots of love and attention!

Now speaking of bulldogs from England, we all know and love this pug-like breed. English bulldogs are taller and stockier than pugs and with larger heads. But the similarities are there.

The English bulldog was bred to use in the sport of bull-baiting, which is why they have such a wide space between their front legs so that they could hold their ground. The breed dates back to medieval times.

Luckily bull baiting is no longer a sport, so the English bulldog (known simply as the ‘bulldog’ in America), has a firm place as a favorite household pet. Bulldogs are known for their unflappable nature and their patience and gentleness with children. 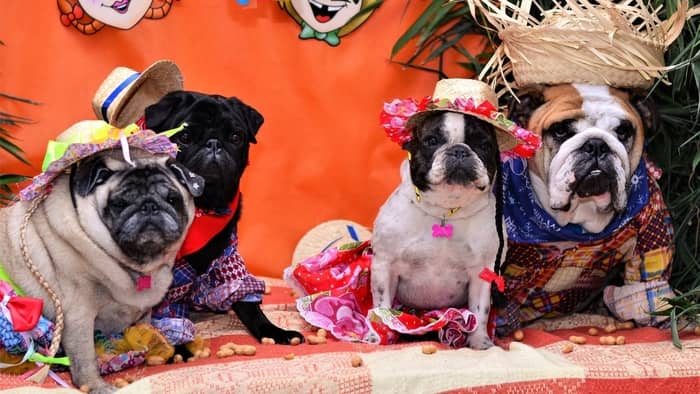 The Boxer does not look much like a pug at first glance – these dogs are large and powerfully built. But if you peer into the Boxer’s face long enough, you will notice that they are rather pug-like, with big brown rounded eyes, and a short muzzle.

The Boxer is an energetic dog, who can be wary of strangers but gentle with their family. They do like to stand on their hind legs and ‘box’ with their front paws though! They are so clever that they were one of the first dogs used in police work.

Boxers originated in Germany in the 1800s, where they herded cows in slaughterhouses. They are a versatile breed.

This sweet little companion dog shares its small stature and its teddy bear facial features with the pug.

The King Charles Cavalier Spaniel is a lovely companion breed with a sweet nature. They are finer boned than the pug and have a long sweeping coat and floppy ears.

This pug-like dog breed dates back to the Tudor period, where they were the ultimate lap-warmer. The ‘Cav’ was very popular in England in the 1600s, where it was a favorite in the royal court of King Charles II, hence its name. 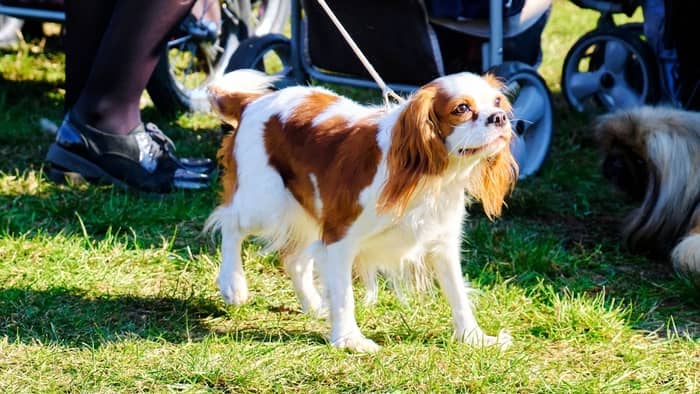 The Japanese Chin is another brachycephalic breed. Like the King Charles Cavalier Spaniel, they have long and flowing silky coats. Again, the facial structure and features are like all of the other dogs on this list, but they are more fine-boned than the pug.

The Japanese Chin is considered to be a happy and lively little dog, whose origins lie in the ancient Imperial courts of central Asia.

The Dogue de Bordeaux is a large mastiff breed from France. They too have a pug-like face, except on a much grander scale. These dogs used to be used to pull carts and herd flocks of livestock in southern France, back in the Middle Ages.

These dogs often come in all red, with amber eyes. The dog in the famous movie Turner and Hooch was a Dogue de Bordeaux.

If you imagined a pug growing taller and gaining muscle, and with a red coat, you’d have something like this dog! 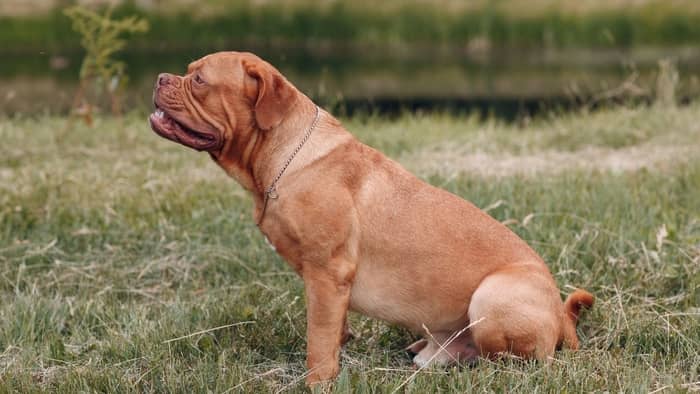 The Pekinese were the royal dogs of ancient China. Underneath their long coats, they have sturdy bodies. Once again, like the pug, the Pekinese has a pushed-in snout and rather pronounced brown eyes.

But the facial features are where the similarities end between these two companion dog breeds. This pretty little lap dog is more aloof and dignified than the clownish goofball pug!

That brings us to the end of our list of pug-like dog breeds.

We hope you enjoyed it! It’s always a good thing to learn about new dog breeds because it opens our minds up to the possibility of considering another breed that we previously didn’t know about when we are on the hunt for our perfect four-legged companion.

What other dogs would you add to a list of pug-looking dogs? Let us know in the comments section below, and share our article if you know a pug-lover!

Read more about: Where Did Pugs Originate From?