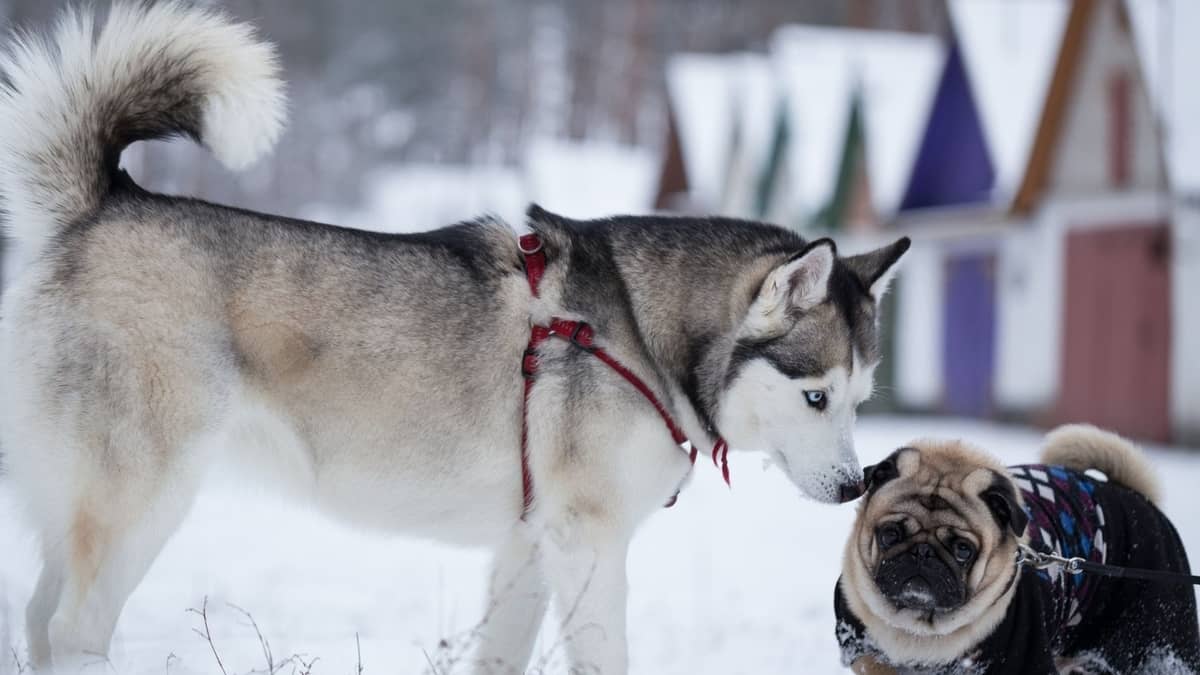 Dog breeds with tails that curl up can be found throughout the dog world. These dogs have many admirers who love the look. But why are there such curly-tailed dogs? This article will not only look to answer that question, but of the over 25 breeds of dogs with curly tails, I will talk about a few in detail.

Not all dogs with curly tails are purebred dogs. Many are mixed breeds of all sorts and some are new designer hybrid dogs. The question I asked often was why? Why do some dogs have tail that curl up? Most dogs do not. So of those that do, what sets them apart to continue to breed in this physical feature. Does the curly tail serve a purpose for the dog? Is the purpose the same for every dog breed with curly tail?

Why Are There Curly Tailed Dogs

Dog breeds with tails that curl up can be very cute dogs and especially puppies. But what is a tail? We love to see our dogs wagging their tails, but do we ever consider what a tail is? A dog’s tail is made of cartilage and bone and is basically a part of the dog’s spine. It acts a lot as a human tailbone does except that it extends into an actual tail and our tailbone does not.

Hemivertebrae usually only affects the tail and creates curly tail dogs. It is usually a very specific dog breed with tails that curl up. For instance, the adorable Pug and the enigmatic Basenji are just two dog breed with curly tails. Usually, this is because, over the generations, the curly tail has been intentionally bred into the dogs.

If you see a purebred dog that doesn’t fall into this category of breed-specific curly-tailed dogs, then the tail would be considered a “fault”. This would not allow that purebred dog to be shown in an AKC dog show. These dogs who don’t belong to a breed of curly-tailed dogs could have hemivertebrae that is more extensive and more dangerous.

The dog breed with curly tail is certainly not the majority in the world of purebred dogs. However, there are more of them than you might think. For instance, I mentioned just a couple earlier in this article but there are at least 20-25 more. I am not going to discuss or even name all of these breeds, but we will talk about a few more.

Dog breeds with tails that curl up and might be very familiar to most people would include the Pug, but many people are not familiar with the Basenji. Another curly-tailed dog breed that is popular and well known is the Bulldog. Most of the dogs with curly tails are very different from each other.

Alaskan Malamute, Akita, and Siberian Husky breeds are large working dogs. On the other hand, the Pomeranian, German Spitz, and Swedish Vallhund are smaller dogs with curled tails.

Learn more about: Why Do Pugs Have Curly Tails

The curled tail is itself very different from breed to breed. These distinctive tails really do make the dog stand out from other breeds. At a dog show with hundreds of dogs, you can’t help but notice the dog breeds with tails that curl up. The tail can just have a spiral at the end, or it can look like a corkscrew, some though curled lay over the dog’s back.

The Spitz Family Of Dogs

Here are some additional examples of curly-tailed dogs. Within the Spitz family there are a wide variety of dogs and certainly not all the breeds have tails that curls. However many, many of them do. You might actually be able to name the ones that don’t – like the Pembroke Welsh Corgi who often has no tail at all – rather than all the ones that do.

The Spitz family of canines usually sport pricked ears and thick, double coats along with their curled tails. This group includes the Pomeranian, German Spitz, Shiba Inu, and Norwegian Lundehund. These are the smaller members of the family.

There are however much larger members of this same Spitz family. This group of dog breeds with curly tail includes The Chow Chow, the Samoyed, the Eurasier, the Norwegian Elkhound, the Swedish Lapphund, and the Finnish Lapphund. These dogs are medium to large breeds with a Spitz background. Let’s take a closer look at just one of these Spitz dogs with curly tails. The Swedish Vallhund is someone unique among the curly-tailed dogs. They have recessive genes that can allow members of the breed to be born with the typical curled tail, a long tail, or no tail at all.

This breed has much in common with the Pembroke Welsh Corgi who is also in the Spitz family. The Pembroke is known for not having a tail so you can see where that might come from in the Vallhund.

For the Pembroke, a tail was a detriment and for the Vallhund, the flowing tail curling over the back was a tool. The Vallhund is rare but making a comeback in the dog show world. They are smart and athletic and make great companion dogs.

Another member of this family that we should take a look at briefly is the Karelian Bear Dog. Yes, you guessed it. They were bred to hunt bears. When they are staking their prey, their tail is not curled but rather hangs down. However, when the Karelian takes off the tail comes quickly up to show the tightly curled coil at its tip.

This is a fairly new breed, developed in the 1930s to hunt large game. The Karelia Bear Dog was the result of developmental breeding that allows it to be strong enough and fearless enough to hunt a very large game. This is a breed few people are familiar with.

Dog Breeds With Tails That Curl Up

As you have seen this is a unique characteristic in several breeds. Though it is not common in the hundreds of AKC registered breeds there are over 20 dog breeds with tails that curl up.

Read more about: Why Do Dogs Dig On Beds?