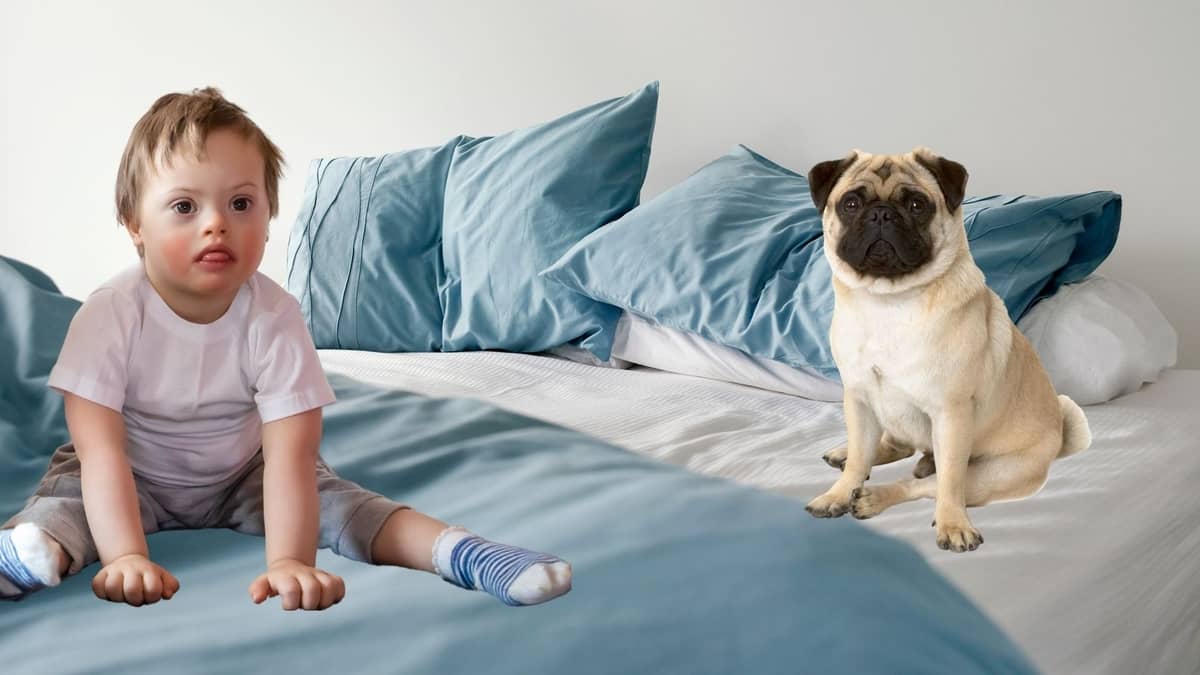 Do Pugs have down syndrome? You are probably aware of the fact that dogs develop the same types of ailments as their human counterparts. Especially if you are a pet parent. In the end, we are all the same, two-legged or four-legged, doesn’t matter. We all belong to the animal group. The only difference is that people are just a more sophisticated version compared to canines.

Down syndrome is not an exception when it comes to having ailments. It is a terrible genetic illness, greatly affecting the life of the victim as well as those who are related to him/her. Logically, if humans can get it, so can dogs. But is it 100 accurate?  Do canines get down syndrome? Let’s dive deeper into this difficult topic. But before we talk about down syndrome in Pugs, we need to fully understand this ailment and discuss it in detail to have a clear picture. After all, as they say: “Forewarned is forearmed.”

Down Syndrome At A Glance

So what exactly is down syndrome? If you are not somehow involved in the medical field, you are probably not going to understand the complex medical terms used to describe this condition. Simply put, it is a “bug” in the genetic code. Or you can call it a DNA abnormality that is formed when the baby is still a fetus in the mother’s loins.

Every “normal” human on the planet has 23 pairs of chromosomes in each cell’s nucleus (and we know that our two-legged bodies consist of cells), nothing extra. A down syndrome person has an additional copy of the 21-st chromosome.

The cause for that is unknown to this day, nobody knows why this happens. But mothers who have babies later in their lives (closer to the age of 40) are more prone to giving birth to a down syndrome baby. Having a “special” child has nothing to do with socioeconomic status, race, religion, or nationality. Any woman could be at risk of conceiving a baby with this type of disorder.

If a child is diagnosed, it is very common for him/her to have muscle weakness, a wide flat face, very small, widespread eyes, a short body (including limbs). Also, a pretty common trait of a person affected by the syndrome is a very low IQ (around 52 out of 200). To make matters worse, quite often a child with this ailment develops other overlapping ones like hearing, eye, and heart problems. Now, let’s move from the two-legged to the four-legged world and see if down syndrome is something they can also encounter.

Can Dogs Have Down Syndrome?

While humans might think that their fluffy companions can develop it as well just because they have a lot of similar illnesses to people, dogs do not have the “official” down syndrome diagnosis. And there would be no way for the four-legged to have the exact same type of mental disorder because of the chromosomes make-up. As we briefly mentioned above, humans have 23 pairs of chromosomes, while doggies have 39 pairs. It’s a big difference. Rather, puppies have something similar to down syndrome, more like a developmental delay condition. Moreover, not only physical growth latency but a mental one as well.

Just like in humans, canines’ physical appearance can be very strange from first sight. Pooches might have a bigger head, a flat face, a small body, and short legs. Hence, you may notice that they are moving very slowly, encounter eyesight, hearing, and muscle strength problems. 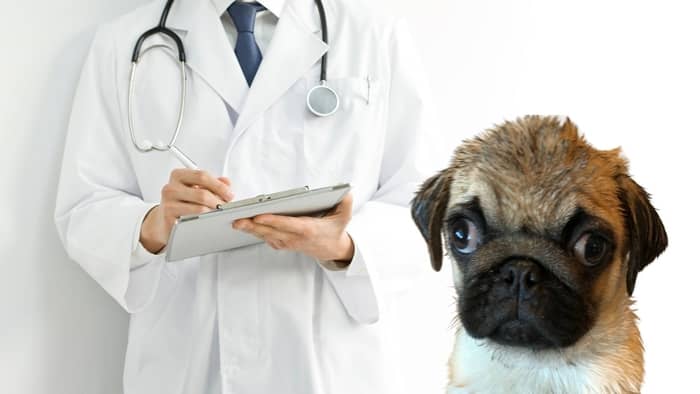 Learn more about: Do Pugs Eyes Pop Out And Why

Therefore, if you see your pooch is acting weird, doesn’t move much, or doesn’t hear you if you try to get its attention-pay a visit to your vet without delay. And now since we covered the puppies with down syndrome topic, let’s take a close look at the Pug breed in particular and try to answer the question “Do Pugs Have Down Syndrome?”

Do Pugs Have Down Syndrome?

When you first look at a Pug, you might actually think there’s something wrong with it since it is a brachycephalic breed. It looks very different from its other canine fellas: a weird pancake face, bulging eyes, a short body, and tiny legs. It definitely fits the down syndrome dog profile. But it is not the case here. Well, at least not always. Such physical characteristics are normal for Pugs, that’s what they inherited from their predecessors in ancient times.

But Pugs are no different from the other furry pals in the sense that they may get something similar to down syndrome. They may experience hearing or eyesight problems, and not be focused on what you are telling them. However, having eye, ear, and heart problems is very common for Pug pups to begin with. These are the breed’s inherited health issues, dating way back to their Asian ancestors. Hence, it is very easy to confuse the usual Pug’s health symptoms with the mental disorder. That’s why it is crucial to bring your hound for a regular yearly check-up. A vet will most definitely be able to let you know if it’s either something minor or a serious psychological condition.

So how do you take care of your fluffy companion if it does indeed have a mental disability?

Having a “special” dog is a challenge. It can get tough, unbearable, and very hopeless. Remember, your Pug didn’t choose the disorder, it chose him. Maybe it happened for a reason? Maybe you two met to learn something from one another? Your hound can learn that it is not alone in its misery, the owner is right by its side. And you can learn the necessity of being patient, even in the most desperate of situations. Love can truly create miracles!

Read more abour: Why Do Pugs Lick the Air?