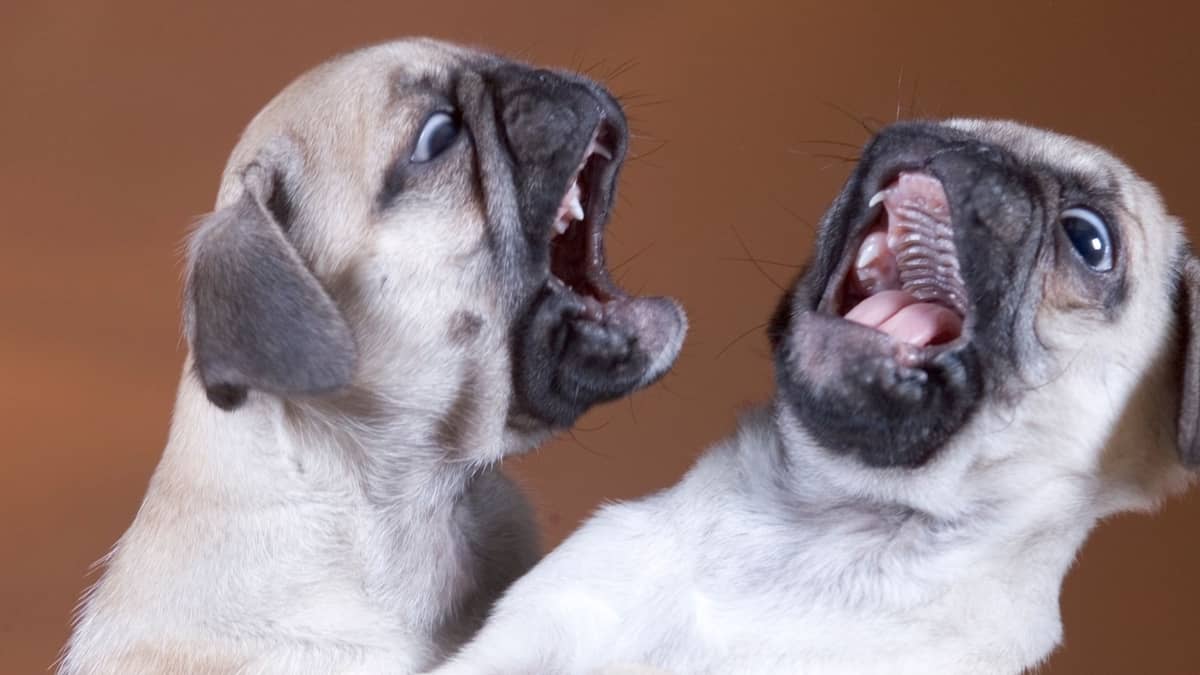 Pugs: cute Asian travelers who crossed the pond and ended up in Europe as well as the Americas a long time ago. They were greatly accepted in the highest of courts, becoming royals’ favorite breed for years to come. Pugs are known to fit right into practically any household, no matter the size.

These pooches also have a reputation for being kid-friendly, playful, and extremely social. You know what they say: “If it sounds too good to be true, it probably is”. Are wrinkled creatures really that ideal? Can Pugs be aggressive?

Let’s see whether or not it can be the case and, if so, what the reasons for Pugs’ behavior problems are.

Can Pugs Be Aggressive? Most Common Reasons For Pug’s Fighting Tendencies

Any reputable dog trainer will confirm how important early socialization is for any growing furry fella. Just like humans need friendships and close relationships, canines crave other fluffy buds’ company. And it is very beneficial for a dog’s stable mental health.

How? It teaches them communication skills, sharing, group play rules, and problem-solving while in a pack. In case a pooch is not getting an opportunity to meet other doggos, it can start acting out pretty badly. It will need to channel its frustration somewhere. Very often it is an owner who falls victim to a Pug’s dominating behavior.

Some pooches get so attached to a pet parent, they will start whining, nipping, and barking at the first sign of a master leaving the house. A toy breed like a Pug is one of the several prone-to-anxiety toy dog species. Since all little doggos are great lap companions, they are used to the company of humans.

They don’t want to be apart from you even for a minute. “Can Pugs be aggressive?”. Generally, Pugs are very lovable and easy-going.

Yet, if you leave them in solitude a lot, they will start to take their frustration out on you. Does your Pug exhibit signs of an aggressive anxiety problem? Then you need to work with a professional trainer to get that squared away. However, training services may be very expensive.

Don’t have the funds to pay for a doggy boot camp? You can always try tiring your mutt to the point of exhaustion. All it would want to do afterward is sleep.

A lengthy neighborhood walk or a play session at a dog park will be enough to let that anxious Pug energy out. Hopefully, your hound would want to rest while you are away. Doggie daycare is an excellent opportunity to “kill two birds with one stone.” It will help a four-legged socialize better with its new furry friends, and focus on what’s happening around it.

As sad as it is, when a dog gets old, it gets “cranky”. It is so funny how senior canines act the same way as human retirees. They start getting similar ailments like arthritis, cardiovascular issues, brittle bones, eyesight troubles, and, in some instances, weight gain.

Obviously, the more a body aches, the moodier a pooch will get. Therefore it is important to give it extra love and attention and make sure it stays up to date with its vaccines. If a bad behavior escalates, bring it up to a vet’s attention. A specialist may prescribe some calming supplements to help your aging baby deal with its senior stage troubles.

Unfortunately, there are some cruel pet owners out there who abuse power and get pets only as a “punching bag” to let their built-up frustration out. They will punish a dog for every little thing they did wrong. Gradually a poor furry thing will grow to be very fearful of people.

And that hatred will come out when a new potential owner comes up to a mutt, trying to pet it. Once a dog had a negative experience, it will be very hard to undo the damage that was done previously. That’s why very often those abused dogs are staying at the shelters with no one willing to adopt them.

The opposite of the above-mentioned physical abuse situation. When a wrinkle-faced pooch gets everything it would ever want, you can see a Pug’s dominating behavior in full force. And many Pug owners make that mistake because this canine species is considered a toy breed.

Some pet mommas would raid pet stores in search of that special winter coat, or 100th toy for their beloved flat-faced baby. Too much TLC can easily backfire on any well-wishing master. You are creating your own little monster by forgetting that you are the pack leader of the household, not your pooch.

Pooches who were surrendered to shelters, will have major trust issues. It will be very hard for the new owner to break a dog’s “vicious cycle” of feeling rejected, neglected, and unwanted. Abandonment can lead to depression, and/or aggressive behaviors.

Hence, if a newbie pet parent wants a surrendered puppy, he/she will have to probably hire a professional dog behavior specialist. One will help come up with a good plan to change a mutt’s destructive mental patterns and start enjoying its new life to the fullest.

So what steps can you take to eliminate a serious aggression problem that a hound may exhibit?

How To Prevent Pug’s Behavior Problems?

1. Take the decision to adopt a pup very seriously

You have to think real hard before you introduce a new member to your family. A canine is not a toy that you can just throw away when you got tired of playing with it. It is a living creature with its own emotions, feelings and it does get hurt like humans. You need to be absolutely sure that you are making the right decision.

2. Establish hierarchy right off the bat

A pet parent has to show that he/she is the only pack leader in the household. A pooch has to follow you, your command and it is important to implement the hierarchy as soon as a hound crosses your threshold.

Maybe it is a cliche to say “A good dog is a tired dog,” but it is still very accurate. Tired mutts are less likely to be up to no good as well as are not as likely to develop separation anxiety issues.

Learn more about Can Pugs Howl? A Flashback To A Canine’s Ancestry.

As soon as your pup is ready to hit the dog park, do it! It needs a company of its own species, frolicking in the dog run and doing a lot of booty-sniffing. May be gross to you, but this is how canines learn about each other.

Absolutely no spoiling! While it is ok to love your dog and show it affection, don’t overdo it. As soon as a four-legged senses that it got you “wrapped around its paw,” it will make sure to show you that now roles are reversed.

6. Talk to a professional trainer

At the first sign of an anxiety disorder, a biting attempt, or a full-fledged attack, you have to turn to specialists for help. Read reviews, talk to your vet and see which one might be suitable both for your pup and your wallet.

Can Pugs be aggressive? Absolutely, even though it is one of the friendliest breeds in the canine zodiac. If you are not being an appropriate leader your Puggo can follow, you will see that its demeanor is going to change.

Also, a Pug’s behavior can be out of the ordinary if it was abandoned or abused before. Always consult a vet specialist if you are not sure about the possible steps you can take to help bring your pal on the right track. After all, you do want to establish a trusting, fulfilling, and rock-solid bond with your flat-faced friend, don’t you?

Read more about Do Pugs Slobber? 8 Reasons Why Canines Do That